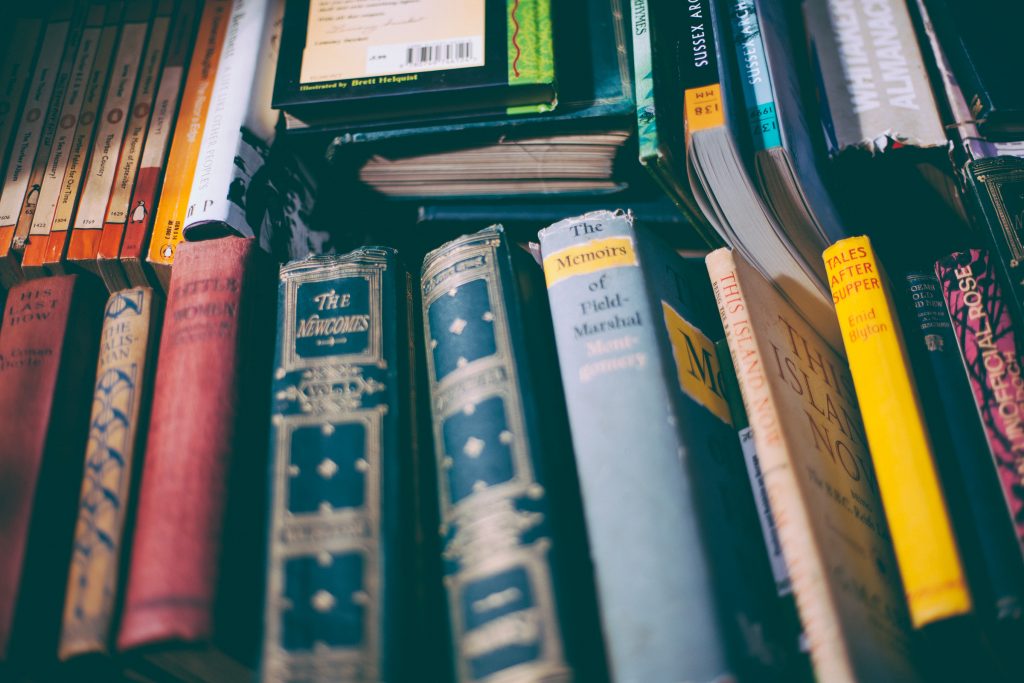 One of the best parts of older books, in my opinion, has always been the possibility of finding things wedged in between the pages: sometimes used as an impromptu bookmark, some stuffed there to hide, some shuffled in by accident. There’s just something a little bit magical about it.

I was recently rearranging my bookshelves (alphabetically by author of course, which had fallen to disarray since our big move), when I happened across a call to arms from my best friend in a book I hadn’t cracked open since high school, at least fifteen years ago. It was a delight to see the old photocopied, handwritten proposal for all her artistic friends to pool our talents to form an “alternative zine.” It was dripping with wide-eyed Art Kid Pretension, and I had to send a picture to her as soon as I found it. She called me, breathless with embarrassed laughter.

Had I donated the book, I can only imagine the confused bemusement of whoever found it. I know I’m not alone in getting a little blip of joy in finding the sorts of little, mundane things other people forget. Entire blogs and forum threads are dedicated to the collection or discovery of found ephemera.

2.) The Sorts of Things That Collectors Dream Of:

“Inside a volume, one of eight bought at a local garage sale, I found a charming child’s Christmas card with the inscription “Merry Christmas to Harry from …..(fairly illegible). About two years later while trying to decipher the signature, the name suddenly revealed itself….”from Frank Baum”” —Jeffrey from Albion Books in Irvine, California, via Neat-o-Rama 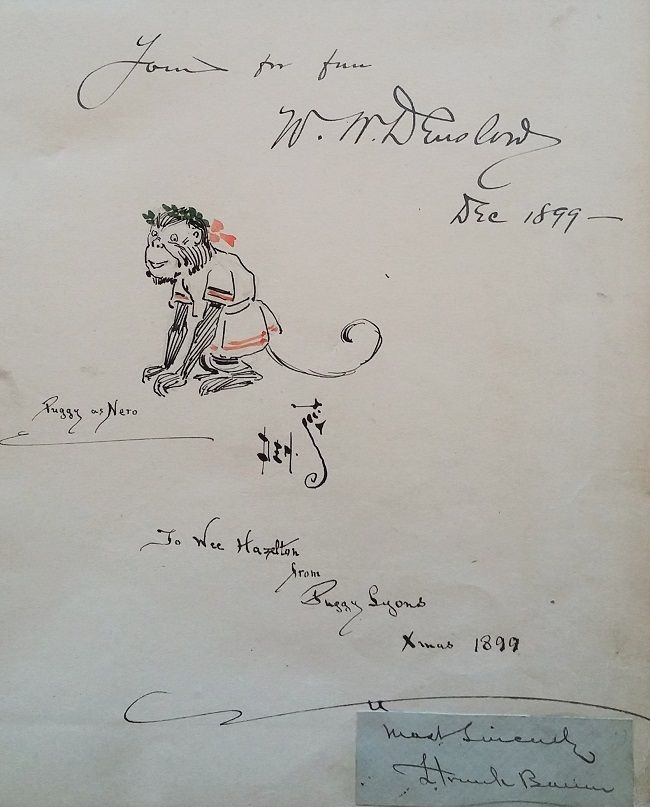 3.) There’s an entire Flickr group dedicated to “Things Found in Books” – some are rather expected, such as bookmarks and pressed flowers, but there’s also gems like this: 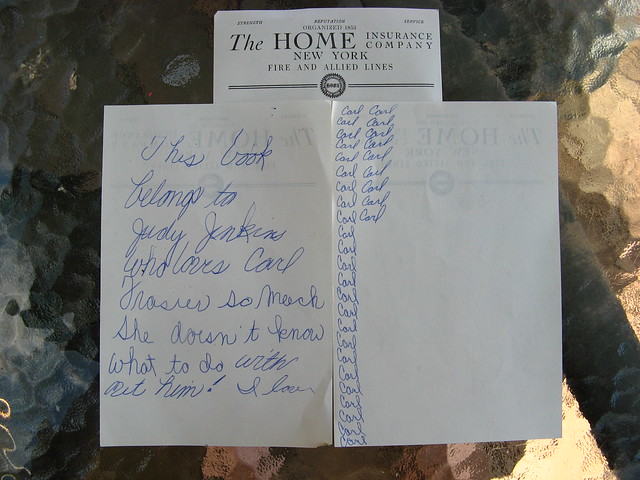 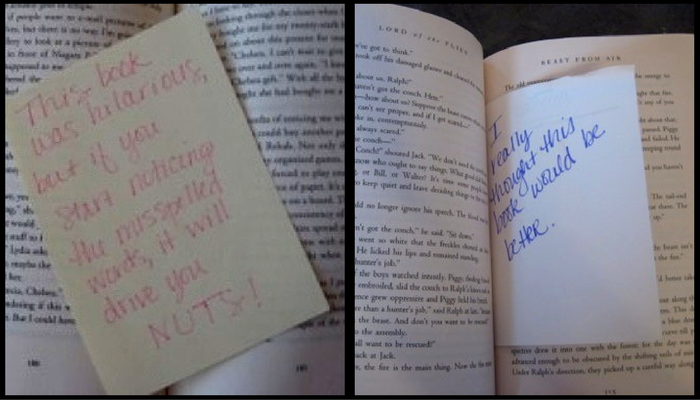 I know what I’m doing with my next library book…

5.) Real Head-Scratchers: I wish we had pictures of these! A call-an-escort card featuring a busty blonde, a second escort card with an even more scantily clad lady of negotiable affections, and a ticket to a Go-Gos post-reunion concert (Found in: Green Lantern: Hero’s Quest by Danny O’Neil, via user “kittens for breakfast”, MetaFilter)

And my personal favorite… 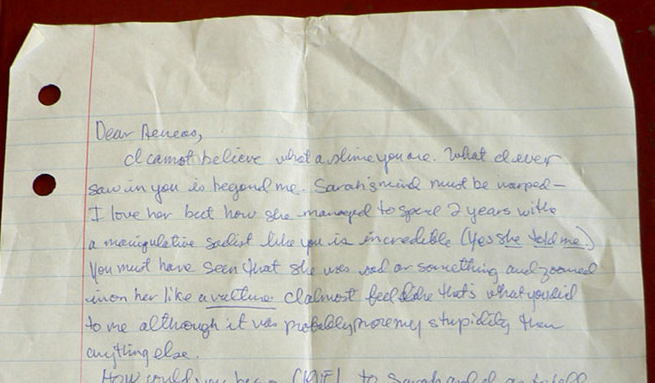 I cannot believe what a slime you are. What I ever saw in you is beyond me. Sarah’s mind must be warped – I love her but how she managed to spend 2 years with a manipulative sadist like you is incredible (yes she told me.) You must have seen that she was sad or something and zoomed in on her like a vulture. I almost feel like that’s what you did to me although it was probably my stupidity then anything else.

How could you be so CRUEL to Sarah and I as to tell her that (Michelle told me). Did you want to hurt us? What did we ever do to you, slime? Did you just forget that we made a pact not to mention this LUDICROUS flirtation? My God, WHAT did I ever see in you? You’re nothing but a self-satisfying walking mass of ego, a phony!!! And the most ridiculous part of it all is that you’re not even worth the trouble. You’re downright ugly and you talk funny. You don’t know how to dress. You have all the morality & sentiment of a JUNGLE BEAST. LESS!!! And you’re a colossal snob; a boor and a boring old fart. We won’t even go into your sexual perversities – you nasty voyeur!

Not and never will be either —

While it’s not a Thing Found in a Book, it’s too interesting to pass up:

There’s a website called BookCrossing, where users can order special stickers with serial codes and the declaration, “TAKE ME, I’M FREE!” to put onto books they leave in public spaces. Owners can declare where they’ve “released” or found a book, and it makes a fun way to track all the places a book can travel to. Can you imagine what sorts of cool ephemera you could add to a book before releasing it into the wild?

And since we’re on the subject, what are some of the things you’ve found in books? Leave your comments below!