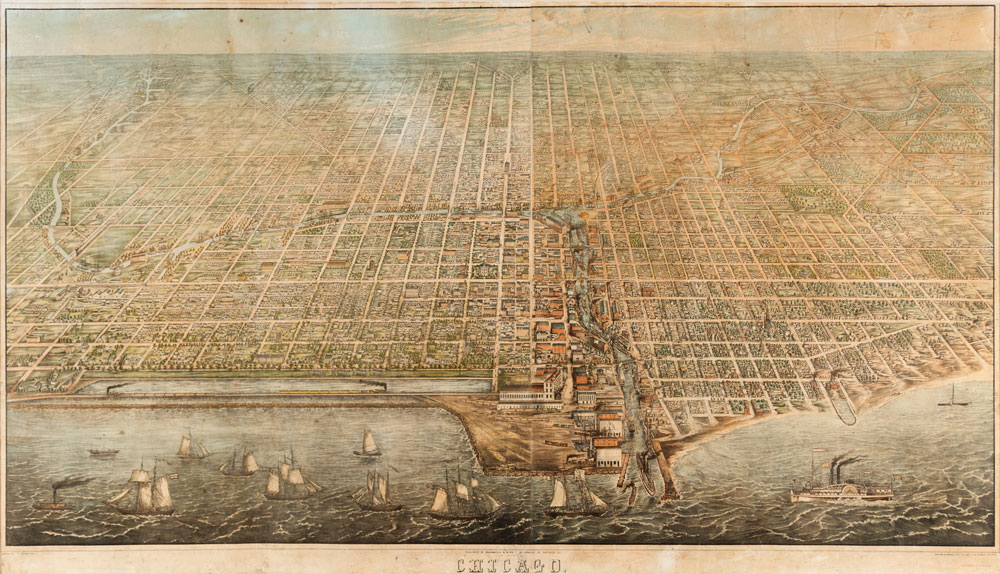 J.T. Palmatary’s rare birds-eye view of pre-fire Chicago sold just shy of $200,000 in Leslie Hindman Auctioneers’ September 13 Fine Books and Manuscripts auction conducted in Chicago. It was printed in 1857 by Braunhold & Sonne and is one of four known copies. The three other copies are held by the Library of Congress, the Newberry Library and the Chicago History Museum.

“As the map is one of only four known copies, we’re thrilled that it sold to a Chicago area collector,” said Gretchen Hause, Director of Fine Books and Manuscripts at Leslie Hindman Auctioneers.

Palmatary is known for his aerial views of cities. The birds-eye view of Chicago was completed just one year after the Illinois Central Railroad was built, which appears in the foreground of the map. Another notable feature is an area called “The Sands,” visible in the lower right-hand corner. Notorious in its time, the area was known for having a high concentration of brothels, gambling dens, saloons and inexpensive motels. In 1871, during the Great Chicago Fire, the Sands became a point of refuge for displaced Chicagoans. Palmatary detailed notable places in the city, as depicted on the map via a lower margin legend. The view includes street names, homes, churches and points of industrial interest.

“The market remains strong for rare material in excellent condition. Both of these things contributed to the high price realized for Palmatary’s Chicago map,” said Hause.

The Fine Books and Manuscripts department is now accepting consignments for its December auction. Visit lesliehindman.com for additional information.

Leslie Hindman Auctioneers, one of the world¹s foremost fine art auction houses, has been providing exceptional service and achieving record prices since 1982. With more salerooms in the United States than any other auction house, Leslie Hindman Auctioneers conducts over 60 auctions annually in categories such as fine jewelry and timepieces, contemporary art, modern design, rare books, furniture, decorative arts and more. The firm has salerooms and business offices in Chicago, Atlanta, Denver, Milwaukee, Naples, Palm Beach, Scottsdale and Saint Louis but connects with millions of collectors worldwide through online resources and global listings. The firm is also a founding partner of Bidsquare, a live auction platform formed by six leading auction houses, and owns a proprietary online bidding platform, LHLive, as well as LHExchange, an e-commerce site specializing in high-end designer furniture and decorative arts. Visit www.lesliehindman.com for more information.

Books about or set during the Chicago Fire
Get a discounted subscription to Fine Books & Collections on Biblio!