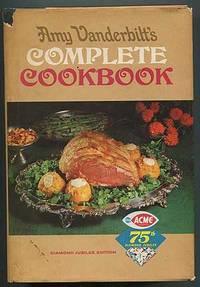 Illustrated by a young Andrew Warhol

Andy Warhol, famous for his Pop Art renditions of Campbell’s Soup Cans and other supermarket staples, not only illustrated a popular cookbook early in his career as a commercial artist, but he also self-published his own cookbook.

After completing a degree in pictorial design from the Art at the Carnegie Institute of Technology (now Carnegie Mellon University) in 1949, Warhol moved to New York and began working as a freelance illustrator for magazines and trade publications. He worked as an award-winning illustrator throughout the 1950s; his art was featured in Glamour and Vogue magazines, advertisements in the New York Times for Tiffany & Co and I.Miller Shoes, album covers for record labels, dust jackets for publishers, and even illustrated a number of books for the “Best in Children’s Books” series. 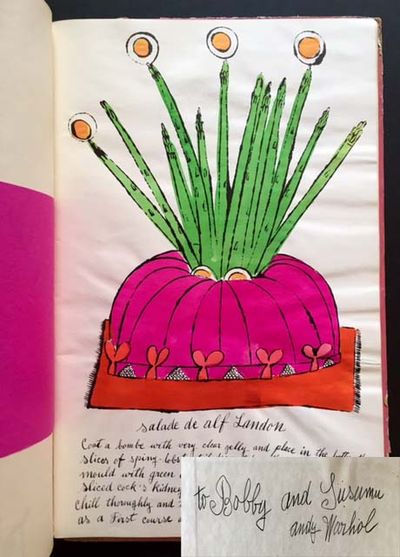 A page from one of the scarce, original copies of Wild Raspberries. (sold)

In 1959 Warhol self-published a cookbook with Suzie Frankfurt, a socialite and well-known interior decorator. Frankfurt first saw Warhol’s illustrations at the Serendipity 3 ice cream parlor in Manhattan, where Warhol was a frequent customer and displayed his artwork. Frankfurt, taken by Warhol’s whimsical drawings of flowers and faeries, arranged a meeting with him. After becoming friends the two decided they wanted to write a cookbook for people who didn’t cook – poking fun at the complicated cooking and entertaining books popular in the 1950s. They called their book Wild Raspberries after Ingmar Bergman’s then-popular film Wild Strawberries. Frankfurt wrote the recipes, Warhol’s mom Julia (who lived with him at the time) did the calligraphy for the book, and they hired four school boys to color the pages before sending them off to local Rabbi’s bookbinding shop to be sewn into booklets – this assembly-line production of his art would later become Warhol’s trademark. Although the pair was sure their masterpiece would sell thousands, the endeavor proved so labor-intensive they only created 34 fully-colored versions of the book, and of those only sold 20, giving the others away as presents.

In 1962 Warhol quit his job as a commercial artist and started to exhibit the Pop Art which he would become famous for, including 100 Soup Cans, and 100 Coke Bottles. Warhol continued to make art until his death in 1987 at the age of 58. Following in Warhol’s film-making tradition the Warhol Museum in Pittsburgh has a 24/7 camera live-streaming on his grave site.

In 1997 Wild Raspberries was republished by Bulfinch Press, and Frankfurt told the New York Observer: “It’s really beautiful, and I’m thrilled it’s been republished, but it’s a little dippy… That’s what the book is, ‘Roll the Chauffeur over to Trader Vic’s side entrance and pick up a suckling pig…’ It’s a joke, perfect for Christmas presents.”