There are many famous authors who were also quite fond of food – there’s George R. R. Martin and his lemon cakes and roast capons, J. R. R. Tolkien and his hobbit-sized feasts, and countless other sumptuous tables described in detail throughout popular literature. Some authors take their gastronomic pleasures more seriously than others. To celebrate them, we’ve curated a list of cook books by bestselling authors for you to enjoy. 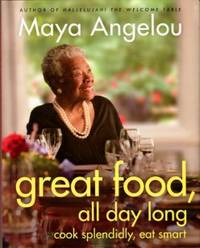 A cookbook from Maya Angelou

1. Maya Angelou (1928-2014) is best known for her autobiographical works, including her first book I Know Why the Caged Bird Sings (1969), but later in her life she also wrote two cookbooks. The first, Hallelujah! The Welcome Table: A Lifetime of Memories with Recipes (2007) is a collection of over a hundred recipes mixed with stories about her life. Her second cookbook, Great Food, All Day Long: Cook Spendidly, Eat Smart (2010) was written when Angelou was eighty-one and her focus had shifted more toward health; the book contains recipes for nourishing, time-tested recipes, intimate autobiographical sketches of how they were developed, along with tips for portion control.

2. Pat Conroy (1945-2016), author of the Prince of Tides and the Great Santini, also collected his life stories in a culinary memoir: Pat Conroy Cookbook: Recipes and Stories of My Life (2009). Conroy walks readers through his life with food and writing, sharing stories and experiences along with the recipes that accompanied them.  The focus in on Southern Cooking, and Conroy’s passion for storytelling and food illuminates the book.

3. Anne McCaffrey (1926-2011), best known for her Dragonriders of Pern fantasy series, was the first woman to win the Hugo Award for Fiction and the Nebula Award. In addition to the almost 100 fiction books she wrote over her 46 year career, she also edited two cookbooks – Cooking out of this World and Serve it Forth – both compilations of recipes and stories from writers of science fiction.

4. Roald Dahl (1916-1990) was an avid cook, and incorporated food into many of his classic book including Charlie and the Chocolate Factory, James and the Giant Peach, and the Fantastic Mr. Fox. His recipes for children were first collected in Revolting Recipes (1994), followed by Even More Revolting Recipes (2001), and a compilation of Completely Revolting Recipes (2009). He also published a grown-up cookbook: Memories with Food at Gipsy House (1991), later published as the Roald Dahl’s Cookbook (1996). This book is full of stories and anecdotes about the numerous meals shared by friends and family around their farmhouse table. We’re not sure if there are any recipes that include snozzberries. 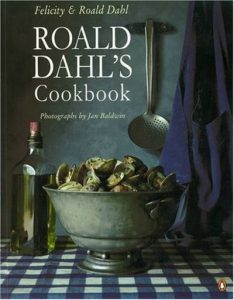 5. Alice B Toklas (1877-1967) first published The Alice B. Toklas Cookbook in 1954, and it has gone on to be one of the bestselling cookbooks of all time, perhaps for its recipe for Haschich Fudge – a mixture of fruits, nuts, spices, and marijuana. Toklas, lifetime partner of Gertrude Stein, wrote the cookbook as a memoir in response to Stein’s published Autobiography of Alice B Toklas (1933) which was in fact Stein’s own autobiography, fictionally written through the eyes her partner, and is considered one of the greatest works of English-language nonfiction of the 20th century. Toklas herself refused to write memoirs during Stein’s lifetime, but her cookbook and the anecdotes collected within it, written after Steins death, are considered to be her seminal work (although in 1963 she did publish an autobiography – What is Remembered).

6. Patricia Cornwell’s best-selling crime books have sold over 100 million copies. In response to the popularity of her Scarpetta series Cornwell published Scarpetta’s Winter Table in 1998 as a holiday gift to her readers, giving behind-the-scenes intimate glimpses of three of her main characters, Kay Scarpetta, Kay’s niece Lucy Farinelli, and Detective Pete Marino. The story takes place in the week between December 26th and New Year’s, and is illustrated with photographs of the locals and activities of the characters, along with lists of ingredients for all the dishes described in the stories including Scarpetta’s special pizza pie and Marino’s “cause-of-death” eggnog. Cornwell followed Winter Table with an actual cookbook in 2001, Food to Die for: Secrets from Kay Scarpetta’s Kitchen, illustrated by large photographs of the recipes and helpful appendices.

For vintage mystery fans, The Nancy Drew Cookbook: Clues to Good Cooking by Carolyn Keene is a fun gift book of recipes that mixes mystery with thematic recipes incorporating titles, places and characters from the first 50 Nancy Drew books. The Nancy Drew Mystery Stories series was created by the Stratemeyer Syndicate, a company founded by Edward Stratemeyer, in 1930, and written by hired ghostwriters. Stratemeyer’s daughter Harriet Adams rewrote a number of the original Nancy Drew books after the main ghostwriter, Mildred Benson, left the company. The Nancy Drew Cookbook was first published in 1973 and was probably put together by Harriet Adams, the recipes are reportedly by Patsy Bogle of Montgomery, Alabama, who sold them for one dollar to Syndicate. The first printing has red endpapers, and noteably tomatoes were left out of the recipe for Italian Salsa Di Pomidoro on page 138. This cookbook was reissued by Grosset & Dunlap in 2005.