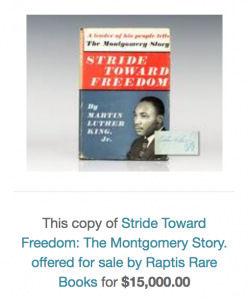 King’s first book, Stride Toward Freedom: The Montgomery Story (1958), was about the Montgomery Bus Boycott and the beginning of the nonviolent Civil Rights movement.

On December 1st, 1955, Rosa Parks refused to give up her seat on a bus, sparking a local boycott that was supported and sustained by the Montgomery Improvement Association. The Montgomery Improvement Association was created December 5th, 1955 by black ministers and community leaders and lead by the unanimously elected President, a young Martin Luther King Jr. Inspired by his studies on Gandhi, King implemented plans of nonviolent resistance to help spur social change.

The yearlong bus boycott was successful in that the Supreme Court ruled segregation on buses unconstitutional in 1956, and that success thrust King into the national limelight.

In 1959, he published a short book called Measure of a Man. It included sermons “What is a Man” and “The Dimensions of a Complete Life” that would later be compiled into Strength to Love (1963), a book of his most requested sermons. 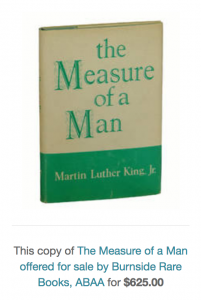 In 1960, King moved to Atlanta to co-pastor Ebenezer Baptist Church with his father. He continued his work promoting Civil Rights with the SCLC.

In April 1963, King was jailed for protesting and penned his famous “Letter from the Birmingham Jail” as a response to Christian and Jewish leaders who advised African-Americans to wait patiently for justice. Birmingham and the Civil Rights movement were thrust into the national spotlight when Police Commissioner Eugene “Bull” Connor instructed fire hoses and dogs to be let loose on peaceful protesters – the resulting violence toward American citizens, including women and children, was televised to the nation.

In August 1963, the March on Washington for Jobs and Freedom attracted 250,000 to the capital where King delivered his famous “I Have A Dream” Speech.

In 1964, King was named Time’s Man of the Year, received the Nobel Peace Prize, and published Why We Can’t Wait.

In 1965, voting rights marchers in Selma, Alabama were beaten on their attempted march to Montgomery in what was later known as “Bloody Sunday.” 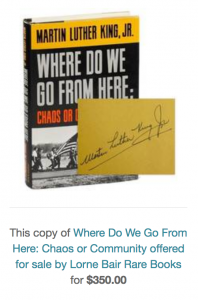 Looking back at a decade of Civil Rights struggles, King wrote Where Do We Go From Here? Chaos or Community? (1967). As King promoted his book he spoke out against the Vietnam War and against poverty in the United States, both of which he felt were important Civil Rights issues.

In March 1968, King visited Memphis, Tennessee to support striking sanitation workers. The march descended into violence, but King stayed in Memphis and persisted, giving his famous “I’ve Been to the Mountaintop” speech on April 3rd.

He was shot and killed outside of his hotel room the next day, on April 4th. He was 39 years old.

His final book, The Trumpet of Conscience (1968), was published after his death with a forward by his widow, Coretta Scott King. This book was first published as Conscience for Change and consisted of 5 lectures King gave over Canadian Broadcast Radio in 1967.

The Autobiography of Martin Luther King, Jr. (1998), edited by Clayborne Carson, is as close to an autobiography of King as is possible. Carson was a historian at Stanford University before being invited by Coretta Scott King to become the director of the Martin Luther King Papers Project. Carson pieced together previously published and unpublished writings, speeches, and interviews to give a first-person account of King’s life through his own words.

Martin Luther King, Jr. was born on the 15th of January, 1929, in Atlanta, Georgia. His given name was Michael King, Jr.

King’s father, Michael Sr., was the Reverend of Ebenezer Baptist Church in Atlanta, and one of the best-paid preachers in the city. King Sr. visited the Holy Land and Europe with ten other Baptist ministers in 1934, ending the trip in Germany to attend the Fifth Baptist World Alliance Congress in Berlin a few days after Hitler became Fuhrer. King was deeply inspired by learning about the Protestant reformer Martin Luther. When he returned back to the United States he gradually changed his name and that of his son from Michael, to Michael Luther, and then finally to Martin Luther, although Martin Luther Jr.’s birth certificate was not officially changed until 1957.