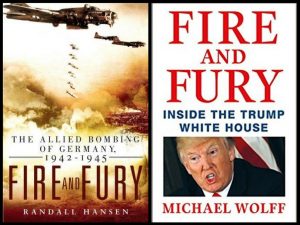 Both authors have seen an uptick in sales, but customers should be sure they are buying the correct title!

With the recent surge of interest in Michael Wolff’s White House tell-all, Fire and Fury: Inside The Trump White House, we at Biblio have seen a spike in orders for a variety of books containing the phrase “fire and fury” in the title. But alas, readers are so eager to indulge in the gossip and stable ingenuity of the Trump White House that in their haste to order a copy of the tell-all, they are mistakenly ordering books like Fire And Fury: The Allied Bombing Of Germany 1942-1945.

NPR reports that Fire And Fury: The Allied Bombing Of Germany 1942-1945 author Randall Hansen is enjoying a huge spike in sales of his book, but Hansen notes that the destruction of war described in his book remains relevant today, especially when self-described “genius” Trump threatens ‘fire and fury’ against North Korea.

If you are in the market for a copy of the White House slam book, we strongly recommend searching online marketplaces by the ISBN, 9781250158062, instead of the title. You should always try to search by ISBN when available, but it is especially useful in situations like these, where title confusion is commonplace, and even sometimes purposeful.

For instance, when Corey Lewendowski’s book, Let Trump Be Trump: The Inside Story of His Rise to the Presidency, was first published, a trickster quickly started offering a self-published, satirical coloring book by the same title. Eagle-eyed readers noticed the difference between the coloring book and the well-written literature they were expecting when it arrived in their mailbox, and the listing was quickly removed from the US Amazon site.