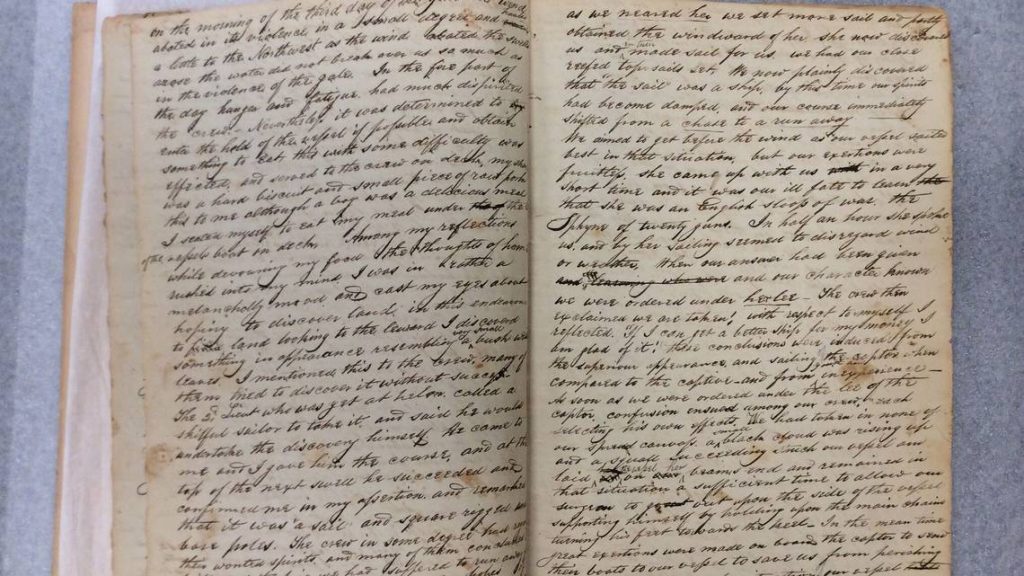 This copy of “The Adventures of Christopher Hawkins” is listed by Tavistock Books, ABAA, at the time of publication.

A treasure was recently found in a strange hiding place – a linen closet in Kansas City. While the relatives of Margaret Davis sorted her estate, they came across the handwritten journal of one of their ancestors: Christopher Hawkins. His journal was penned in 1834 when he was 70 years old, and it recounts his tales as a young privateer during the Revolutionary War.

At the tender age of 13 years old, apprentice Christopher Hawkins turned privateer to help fight the British, but he was captured and made a cabin boy on a British ship.

The adventures of this young man are many – clever escape attempts, subsequent recaptures, and vivid descriptions of the British prisoner ship in which he served time. A version of his exploits was published in 1864 and is still available to purchase in both original and reprint editions:

The ADVENTURES Of CHRISTOPHER HAWKINS, Containing Details of His Captivity, … in the Revolutionary War, by the British … Escape from the Jersey Prison Ship … Now First Printed from the Original Manuscript. With an Introduction and Notes

The hand-written journal has been passed down through the family until it was recently found. The family has donated the journal to the Museum of the American Revolution in Philadelphia, Pennsylvania.