On a foggy summer night, eleven people — ten privileged, one down-on-his-luck painter — depart Martha’s Vineyard on a private jet headed for New York. Sixteen minutes later, the unthinkable happens: the plane plunges into the ocean. The only survivors are the painter Scott Burroughs and a four-year-old boy, who is now the last remaining member of an immensely wealthy and powerful media mogul’s family. 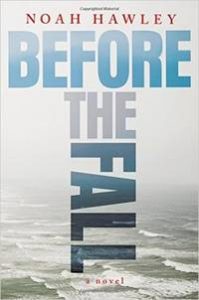 I’ve been on a bit of murder kick lately, so when Georgia Hardstock of the super-cool podcast My Favorite Murder recommended Noah Hawley’s Before the Fall, I eagerly grabbed a copy. This review will contain the big spoiler, so consider yourself warned.

Hawley is a well-known author, producer, and screenwriter, and given that he was the showrunner of FX’s television adaptation of Fargo, I was expecting Before the Fall to be weird, unsettling, and at least a little subversive. Unfortunately, my hopes were pretty quickly dashed, and instead of strange twists and with complicated characters, I encountered a very basic plot with contrived, two-dimensional archetypes instead of actual people. That said, I flew through the book in about a week, and the cliff-hangers (if you could call them cliff-hangers) were more than enough to keep me reading late into the night.

The story centers around a mysterious plane crash in the Atlantic that kills nine of eleven passengers. The book filters between flashbacks meant to round out the various characters on the plane and the current-day chaos of the survivors and investigators trying to process the cause and aftermath of the crash. Among the passengers is a billionaire media mogul who owns a powerful conservative news organization, which is clearly a stand-in for Fox News. A Bill O’Reilly type figure is featured as a primary antagonist, and although I love a good Fox News bashing as much as the next liberal, using an over the top Fox News stand-in is not character development, and it just came off as lazy and uninspired. Most of the characters are pretty flat, with the women being reduced to the ever-popular Madonna/Whore paradigm. The men are a bit better written, but they all fall into three categories: scheming billionaires, one-note assholes, and stoic figures who see themselves above the peculiarities of the cheap modern world. One character in particular was so cartoonishly painted as an entitled hipster, complete with a beard and microbrewery obsession, it was cringeworthy to read.

The Worst and Oldest Story in the World

But the biggest disappointment in Before the Fall is the ending. While it became clear early on that I wasn’t going to enjoy the barely-written characters, I was still at least looking forward to learning what caused the crash. There were hints and suggestions throughout the book regarding possible means and motives, and some of them were legitimately interesting. Unfortunately, the culprit came in the form of a disturbed co-pilot enraged that the female flight attendant he was stalking rebuffed his affections. Yes, this ended up being yet another story of how a man destroyed himself and many innocent people because he didn’t get the girl.

As Kim Ukura writes, “That story is boring. That story is common.” While I disagree with Ukura about the qualities of the rest of the book, she is completely right that pinning the crash on the unfulfilled desires of a man, desires that are rooted in a violent misogyny, is just simply boring. Further, in today’s world, where seemingly every week features some new atrocity committed by a similar type of man, inspired by similar types of reasons, reading a fictionalized account of such a violent and boring pathology has also become exhausting and tedious. Ukura includes a great passage from Jenny where she writes “I’d like a break from the glass-shattering fury that consumes my heart every time I read any iteration of the worst story in the whole world, i.e., Once upon a time, a man turned to violence because a woman he wanted to fuck wouldn’t fuck him.”

So yeah, this was a swing and a miss for me. Like I said, Before the Fall is a quick and enjoyable-enough light read, but the ending is a let-down, and the characters don’t make up for the weak plot. But Fargo is great, so there is that.

One and a Half Stars.