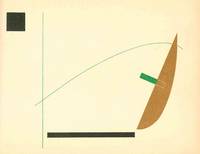 Unpaginated volume consisting of 6 pages (three leaves printed recto and verso) of musical notation by Malipiero, written presumably for the piano in standard treble and bass clefs, in 14 brief sections, followed by 14 plates depicting three-color abstract line and geometric drawings by Veronesi, in which one can see changes and variations developing. Oblong 8vo. Original wrpps. with three-color typographic design. Very minor soiling. Milan (Tip. A. Lucini & Co.) 1939. Signed to front flyleaf by Veronesi and Malipiero. Veronesi was an Italian photographer, painter, scenographer, and film director who trained early on as a textile designer before getting into first photography and then painting. He traveled to Paris in the 1930s where he met Léger and joined the photographic group Abstraction-Création. In March 1935, he participated in the first collective exhibition of abstract art in Italy, together with Oreste Bogliardi, Cristoforo De Amicis, Ezio D'Errico, Lucio Fontana, Virginio Ghiringhelli, Osvaldo Licini, Fausto Melotti, Mauro Reggiani, and Atanasio Soldati. Veronesi was also interested in music, and the idea of translating musical notes into chromatic compositions.
Riccardo Malipiero was an Italian composer, pianist, and music critic. He was a pioneer of the twelve-tone technique, or twelve-note composition, in Italy, a technique which he further promoted in journal articles, books, and lectures. In 1949, he organized the First Congress of twelve-tone music in Milan, which was attended by John Cage, René Leibowitz, Camillo Togni, Luigi Dallapiccolo, Karl Amadeus Hartmann, Bruno Maderna, and others.
As of November 2021, OCLC locates five holdings in North American institutions.

leaves
Very generally, "leaves" refers to the pages of a book, as in the common phrase, "loose-leaf pages." A leaf is a single sheet... [More]
recto
The page on the right side of a book, with the term Verso used to describe the page on the left side.