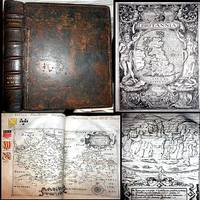 Nice plate of Stonehenge, another of a similar or the same, numerous Latin stone type figures, numerous woodcut initials throughout, few other in text illustrations. Landmark Work!

In 1577, with the encouragement of Abraham Ortelius, Camden began his great work Britannia, a topographical and historical survey of all of Great Britain and Ireland. His stated intention was to "restore antiquity to Britaine, and Britain to his antiquity". The first edition, written in Latin, was published in 1586. It proved very popular, and ran through five further editions, of 1587, 1590, 1594, 1600 and 1607, each greatly enlarged from its predecessor in both textual content and illustrations. The 1607 edition included for the first time a full set of English county maps, based on the surveys of Christopher Saxton and John Norden, and engraved by William Kip and William Hole (who also engraved the fine title page). The first English language edition, translated by Philemon Holland, appeared in 1610, again with some additional content supplied by Camden.

Britannia is a county-by-county description of Great Britain and Ireland. It is a work of chorography: a study that relates landscape, geography, antiquarianism, and history. Rather than write a history, Camden wanted to describe in detail the Great Britain of the present, and to show how the traces of the past could be discerned in the existing landscape. By this method, he produced the first coherent picture of Roman Britain.

Britannia was recognized as an important work of Renaissance scholarship, not only in England, but across the European "Republic of Letters". Camden considered having the 1586 Britannia printed in the Low Countries, and although that did not happen, the third edition of 1590, in addition to its London printing, was also published the same year in Frankfurt, and reprinted there in 1616. In 1612 parts were condemned by the Spanish Inquisition. An abridgement was published in Amsterdam in 1617 and reprinted in 1639; and versions of the text were also included in Joan Blaeu's Theatrum Orbis Terrarum (published in Amsterdam in 1645) and in Jan Janssonius's Novus Atlas (again published in Amsterdam, in 1646).

William Camden (2 May 1551 in London – 9 November 1623 in Chislehurst) was an English antiquarian, historian, topographer, and herald, best known as author of Britannia, the first chorographical survey of the islands of Great Britain and Ireland, and the Annales, the first detailed historical account of the reign of Elizabeth I of England.

Condition is Good/Very Good. Wear to edges/boards/hinges, some loss of leather to extreme corners/colored over, a lot of surface wear to boards, some glue added to front hinge, color added over hinges, hinges holding well, would handle with care.

text block
Most simply the inside pages of a book.  More precisely, the block of paper formed by the cut and stacked pages of a...[more]
hinge
The portion of the book closest to the spine that allows the book to be opened and closed.
fine
A book in fine condition exhibits no flaws. A fine condition book closely approaches As New condition, but may lack the...[more]
title page
A page at the front of a book which may contain the title of the book, any subtitles, the authors, contributors, editors, the...[more]
gutter
The inside margin of a book, connecting the pages to the joints near the binding.
First Edition
In book collecting, the first edition is the earliest published form of a book. A book may have more than one first edition in...[more]
folio
A folio usually indicates a large book size of 15" in height or larger when used in the context of a book description....[more]
plate
Full page illustration or photograph. Plates are printed separately from the text of the book, and bound in at production. I.e.,...[more]
spine
The outer portion of a book which covers the actual binding. The spine usually faces outward when a book is placed on a shelf....[more]
edges
The collective of the top, fore and bottom edges of the text block of the book, being that part of the edges of the pages of a...[more]