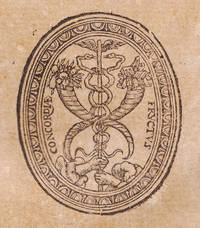 Pages: 227, /1/. Dimensions: 17,4 x 11,3 cm. Binding: No binding, probable was bound with some other titles. Gilted edges. Condition: Almost all leaves heavily browned due to paper aging. A small wormhole and two very tiny holes on title, not affecting the text. Title scratched, some notes and stamp of previous owner removed. Provenance: no marks, but acquired with the part of library of Irish poet William Monk Gibbon.

Nicolas Trigault (1577–1628) was a Flemish Jesuit, and a missionary to China. He was also known by his latinised name Trigautius or Trigaultius, and his Chinese name Jin Nígé. Life and work Born in Douai (then part of the Spanish Netherlands, now part of France), he became a Jesuit in 1594. Trigault left Europe to do missionary work in Asia around 1610, eventually arriving at Nanjing, China in 1611. He was later brought by the Chinese Catholic Li Zhizao to his hometown of Hangzhou where he worked as one of the first missionaries ever to reach that city and was eventually to die there in 1629. In late 1612 Trigault was appointed by the China Mission's Superior, Niccolo Longobardi as the China Mission's procurator (recruitment and PR representative) in Europe. He sailed from Macau on February 9, 1613, and arrived to Rome on October 11, 1614, by the way of India, Persian Gulf, and Egypt. His tasks involved reporting on the mission's progress to Pope Paul V, successfully negotiating with the Jesuit Order's General Claudio Acquaviva the independence of the China Mission from the Japan Misson, and traveling around Europe to raise money and publicize the work of the Jesuit missions. Peter Paul Rubens did a portrait of Trigault when the latter stopped there in 1617 (at right). It was during this trip to Europe that Trigault edited and translated (from Italian to Latin) Matteo Ricci's "China Journal", or De Christiana expeditione apud Sinas. (He, in fact, started the work aboard the ship when sailing from Macau to India). The work was published in 1615 in Augsburg; it was later translated into many European languages and widely read. The French translation, which appeared in 1616, was translated from Latin by Trigault's own nephew, David-Floris de Riquebourg-Trigault. In April 1618, Trigault sailed from Lisbon with over 20 newly recruited Jesuit missionaries, and arrived in Macau in April 1619. Trigault produced one of the first systems of Chinese Romanisation (based mostly on Ricci's earlier work) in 1626, in his work Xiru Ermu Zi (Aid to the Eyes and Ears of Western Literati). Trigault wrote his book in Shanxi province. Aided by a converted Chinese, he also produced the first Chinese version of Aesop's Fables (?? "Analogy"), published in 1625. In the 1620s Trigault became involved in a dispute over the correct Chinese terminology for the Christian God and defended the use of the term Shangdi that had been prohibited in 1625 by the Jesuit Superior General Muzio Vitelleschi. Another fellow Jesuit, André Palmeiro stated that a mentally instable Trigault had become deeply depressed after failing to defend the use of the term, and had committed suicide in 1628.

We ship within 24h of confirmed payment.
All packages are sent via registered airmail. All the purchases are tracked.

Estimated time of delivery:
Notice to US and EU buyers: Be advised sometimes customs can be lengthy and may prolong the time of delivery from 7 to 30 days. In 98% of cases books don't go trough the process but sometimes get stuck.

Buyers are entitled to a partial refund in case items arrive damaged.
Returns are accepted within 30 days of arrival or 90 days from the sale, whichever is greater.

Seller rating:
This seller has earned a 5 of 5 Stars rating from Biblio customers.
Biblio.com member since: 2018
Providence
Ask Seller a Question

Sigedon LTD is an online bookstore founded in 2017. We offer a variety of books and maps, mostly from the Balkan region but also from Europe and Russia.

edges
The collective of the top, fore and bottom edges of the text block of the book, being that part of the edges of the pages of a...[more]
leaves
Very generally, "leaves" refers to the pages of a book, as in the common phrase, "loose-leaf pages." A leaf is a single sheet...[more]