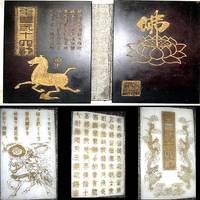 •The Thirty-Six Stratagems is a Chinese essay used to illustrate a series of stratagems used in politics, war, and civil interaction. Its focus on the use cunning and deception both on the battlefield and in court have drawn comparisons to Sun Tzu's The Art of War. It also shares thematic similarities with Zhang Yingyu's The Book of Swindles, a late-Ming-dynasty work focused on the realms of commerce and civil society.

•The Thirty-Six Stratagems have variably been attributed to Sun Tzu from the Spring and Autumn period of China, or Zhuge Liang of the Three Kingdoms period, but neither are regarded as the true author by historians. Instead, the prevailing view is that the Thirty-Six Stratagems may have originated in both written and oral history, with many different versions compiled by different authors throughout Chinese history. Some stratagems reference occurrences in the time of Sun Bin, approx. 150 years after Sun Wu's death.

•The Qing dynasty, also known as the Qing Empire, officially the Great Qing, was the last imperial dynasty of China, established in 1636 and ruling China from 1644 to 1912. It was preceded by the Ming dynasty and succeeded by the Republic of China. The Qing multi-cultural empire lasted almost three centuries and formed the territorial base for the modern Chinese state. It was the fourth largest empire in world history.

•The Qianlong Emperor (25 September 1711 – 7 February 1799) was the sixth emperor of the Manchu-led Qing dynasty, and the fourth Qing emperor to rule over China proper. Born Aisin-Gioro Hongli, the fourth son of the Yongzheng Emperor, he reigned officially from 11 October 1735 to 8 February 1796. On 8 February, he abdicated in favour of his son, the Jiaqing Emperor – a filial act in order not to reign longer than his grandfather, the illustrious Kangxi Emperor. Despite his retirement, however, he retained ultimate power as the Emperor Emeritus (or Retired Emperor) until his death in 1799; he thus was one of the longest-reigning de facto rulers in the history of the world, and dying at the age of 87, one of the longest-living.