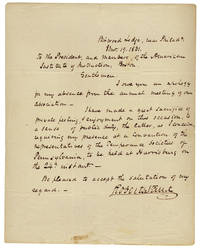 Vaux writes briefly here "to the President, and Members, of the American Institute of Instruction, Boston" apologizing for having missed their annual meeting. It appears Vaux is busy with other reform efforts:

"I have made a great sacrifice of private feeling & enjoyment on this occasion to a sense of public duty, the latter, as I conceive requiring my presence at a convention of the representatives of the Temperance Societies of Pennsylvania, to be held at Harrisburg on the 24th instant."

"As early as 1807 Vaux had joined the Pennsylvania Society for Promoting the Abolition of Slavery...... In 1807 Vaux also assumed leadership roles in the Philadelphia Society for Alleviating the Miseries of Public Prisons and the Philadelphia Association of Friends for the Instruction of Poor Children. Educational reform, the diffusion of education among the illiterate, and the humane treatment of prisoners subsequently consumed most of Vaux's energies... By the early 1820s Vaux had resigned many of his positions in benevolent societies to concentrate on more comprehensive reform.... Among all his efforts to change American society in the early nineteenth century, Vaux worked hardest at the movement to alter the treatment of criminals." (ANB)

Indeed, Vaux was among those Alexis de Tocqueville dedicated his book on prison reform, On the Penitentiary System in the United States and Its Application to France (1833).

All items are unconditionally guaranteed to be as described and authentic. All major defects are noted. Images are not to scale, measurements are given. Returns are accepted for any reason within 12 days of receipt. We accept all major credit cards, PayPal, and check. Institutions and libraries may be billed per their budgetary requirements.

All items are subject to prior sale. Title does not pass to the buyer until the purchase price has been discharged in full.

Seller rating:
This seller has earned a 5 of 5 Stars rating from Biblio customers.
Biblio.com member since: 2020
Wilmington, Delaware
Ask Seller a Question

Poor
A book with significant wear and faults. A poor condition book is still a reading copy with the full text still readable. Any...[more]