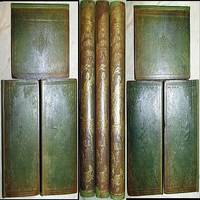 A ROMANCE OF PENDLE FOREST

•The Lancashire Witches is the only one of William Harrison Ainsworth's forty novels that has remained continuously in print since its first publication. It was serialized in the Sunday Times newspaper in 1848; a book edition appeared the following year, published by Henry Colburn. The novel is based on the true story of the Pendle witches, who were executed in 1612 for causing harm by witchcraft.

•Ainsworth based his story largely on the official account of the Lancashire witch trials written by the clerk to the court, Thomas Potts, first published in 1613 under the title The Wonderfull Discoverie of Witches in the Countie of Lancaster. Potts himself makes an appearance in the book, as a "scheming and self-serving lawyer". The novel consists of four parts, each written as a third-person narrative.

•The subject of the Pendle witches was suggested to Ainsworth by antiquarian and long-time friend James Crossley, President of the Chetham Society. During 1846 and 1847 Ainsworth visited all of the major sites involved in the story, such as Pendle Hill and Malkin Tower, home of the Demdikes, one of the two families accused of witchcraft. He wrote the story in 1848, when it was serialized in the Sunday Times newspaper.

•William Harrison Ainsworth (4 February 1805 – 3 January 1882) was an English historical novelist born at King Street in Manchester. He trained as a lawyer, but the legal profession held no attraction for him. While completing his legal studies in London he met the publisher John Ebers, at that time manager of the King's Theatre, Haymarket. Ebers introduced Ainsworth to literary and dramatic circles, and to his daughter, who became Ainsworth's wife.
•As was common practice at the time, the novel was published in a three-volume set known as a triple decker. The first edition was produced by Henry Colburn in 1849, with the subtitle "A Romance of Pendle Forest". At £1 11s 6d, about the amount that a skilled worker could earn in a week, it was expensive.
•The trials of the Pendle witches in 1612 are among the most famous witch trials in English history, and some of the best recorded of the 17th century. The twelve accused lived in the area surrounding Pendle Hill in Lancashire, and were charged with the murders of ten people by the use of witchcraft. All but two were tried at Lancaster Assizes on 18–19 August 1612, along with the Samlesbury witches and others, in a series of trials that have become known as the Lancashire witch trials. One was tried at York Assizes on 27 July 1612, and another died in prison. Of the eleven who went to trial – nine women and two men – ten were found guilty and executed by hanging; one was found not guilty.
CONDITION:
•Conditions are Good/Very Good. Some wear to edges, missing some near ends of spine strips, browning to boards/spines, renewed end pages, some minor blemishing here and there/mainly to margins/title pages, most pages are good, hinges/text blocks are very good!

spine
The outer portion of a book which covers the actual binding. The spine usually faces outward when a book is placed on a shelf....[more]
tipped in
Tipped In is used to describe something which has been glued into a book. Tipped-in items can include photos, book plates,...[more]
First Edition
In book collecting, the first edition is the earliest published form of a book. A book may have more than one first edition in...[more]
edges
The collective of the top, fore and bottom edges of the text block of the book, being that part of the edges of the pages of a...[more]
Cloth
"Cloth-bound" generally refers to a hardcover book with cloth covering the outside of the book covers. The cloth is stretched...[more]