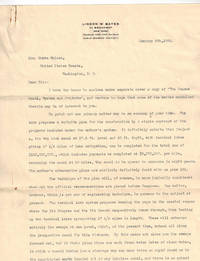 New York: Lindon W. Bates , 1906. SIGNED two page letter typed, folded twice, with original postmarked envelope, Very Good, paper clip impression top edge both pages. On Bates' personal stationery, dated Jan. 6, 1906 and headed "Hon. Knute Nelson, United States Senate, Washington, D.C. Dear Sir:- I have the honor to enclose under separate cover a copy of "The Panama Canal, System and Projects", and venture to hope that some of the matter contained therein may be of interest to you." Bates then goes on to explain the cost, scale, and completion time for his plan in the next paragraph. The rest of the letter goes on to explain how his plan will "...submerge entirely the swamps at sea level, which, at the present time, extend all along the prospective canal.." making "...fresh water lakes of clean water, in which a vessel having large steerage can make twice as rapid speed as in the constricted earth bounded out of any lakeless canal...". And finally stating that "The radical sanitary improvement to be brought about by drowning, under twenty-seven feet of water, all the fever swamps in the vicinity of the canal is apparent." Which it certainly was, given that the French had lost over 20,000 lives in their failed attempt to build a canal in Panama due to mosquito-carried diseases. Lindon W. Bates was an American engineer, author of the 1905 book "The Panama Canal: System and Projects", who worked with Theodore P. Shonts, head of the Panama Plan Commission, and with John F. Wallace, the engineer of the Panama Canal. Senator Knute Nelson was a Civil War veteran, served in both the Wisconsin and Minnesota Legislatures, was Governor of Minnesota, and was the first Scandinavian-born American to be elected to the Senate, where he served from 1895 until his death in 1923. Material pertaining to the Panama Canal from this era is SCARCE. . SIGNED BY AUTHOR. Very Good. 8 1/2" x 11".

Seller rating:
This seller has earned a 5 of 5 Stars rating from Biblio customers.
Biblio.com member since: 2006
Bloomington, Indiana
Ask Seller a Question