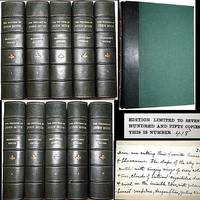 THE WRITINGS OF JOHN MUIR

CONTENTS:
•THE STORY OF MY BOYHOOD AND YOUTH/A THOUSAND MILE WALK TO THE GULF,
•MY FIRST SUMMER IN THE SIERRA, TRAVELS IN ALASKA,
•THE MOUNTAINS OF CALIFORNIA (2VLS.), OUR NATIONAL PARKS,
•THE CRUISE OF THE CORWIN (JOURNAL ARCTIC EXPEDITION OF 1881),
•STEEP TRAILS CALIFORNIA/UTAH/NEVADA/WASHINGTON/OREGON/THE CRAND CANYON, LIFE & LECTURES (2VLS.), ETC.!

•John Muir (April 21, 1838 – December 24, 1914) also known as "John of the Mountains" and "Father of the National Parks", was an influential Scottish-American naturalist, author, environmental philosopher, glaciologist, and early advocate for the preservation of wilderness in the United States.
•His letters, essays, and books describing his adventures in nature, especially in the Sierra Nevada, have been read by millions. His activism has helped to preserve the Yosemite Valley, Sequoia National Park and many other wilderness areas. The Sierra Club, which he co-founded, is a prominent American conservation organization. The 211-mile (340 km) John Muir Trail, a hiking trail in the Sierra Nevada, was named in his honor. Other such places include Muir Woods National Monument, Muir Beach, John Muir College, Mount Muir, Camp Muir, Muir Grove, and Muir Glacier. In Scotland, the John Muir Way, a 130-mile-long route, was named in honor of him.

CONDITION:
•Conditions are Very Good. Little rubbing to some raised bands on spine, slight ding down side edge of some pages to vol.7, blemish to front board of same, otherwise, looks like never opened, few minor blemishes, most pages/hinges/text blocks are very good/excellent!

Cloth
"Cloth-bound" generally refers to a hardcover book with cloth covering the outside of the book covers. The cloth is stretched...[more]
spine
The outer portion of a book which covers the actual binding. The spine usually faces outward when a book is placed on a shelf....[more]
raised band(s)
Raised bands refer to the ridges that protrude slightly from the spine on leather bound books.  The bands are created...[more]
edges
The collective of the top, fore and bottom edges of the text block of the book, being that part of the edges of the pages of a...[more]
rubbing
Abrasion or wear to the surface. Usually used in reference to a book's boards or dust-jacket.
rebound
A book in which the pages have been bound into a covering replacing the original covering issued by the publisher.