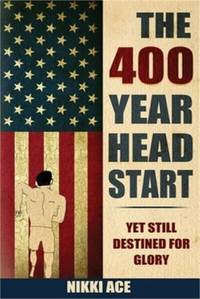 The 400 Year Head Start: Yet Still Destined for Glory

The 400 Year Head Start: Yet Still Destined for Glory

25 Copies Available from This Seller

BRAND NEW
BLACK HISTORY HAS NOT ALWAYS BEEN PRETTY, but the strides that black people have made is a beautiful thing.

Formatted and designed to appeal to a YOUNG AUDIENCE, The 400 Year Head Start is your introduction to the black experience. This book's purpose is to expose the dignity, resilience, perseverance and grit of black people that is simply unparalleled.

From being enslaved for hundreds of years, to fighting for freedom, to trying to eradicate racism, black people have endured nearly insurmountable circumstances.

However, black people still continue to 'run' to survive.

They still continue to 'run' to thrive.

And in this run they are consistently met with hurdles to jump, boulders to climb and getting back up after they have been beat down. They have not had the luxury of running with just the mere restriction of the wind. They've run enduring the pain from whips and from the bondage of chains.

Blacks have not had the privilege of running with just the earth's gravitational pull. They had to run with the intentional racist policies established by local laws and even the federal government. So, as they make attempts to advance with one foot in front of the other, they are a resilient people that persevere no matter the odds.

Although it is only a glimpse of the many setbacks and pitfalls black people have had to come up against, readers will learn through the powerful words in verse and visual illustrations that nothing...NOTHING... has kept the black race from running to glory.

If you enjoyed learning about the black experience from Stamped by Ibram X. Kendi and Jason Reynolds, Between the World and Me by Ta-Nehisi Coates, White Fragility by Robin DiAngelo and The New Jim Crow by Michelle Alexander, then you'll enjoy The 400 Year Head Start for young readers (12 years old and up).

30 day return guarantee, with full refund if an item arrives misdescribed or damaged.

Seller rating:
This seller has earned a 5 of 5 Stars rating from Biblio customers.
Biblio.com member since: 2018
Grand Rapids, Michigan
Ask Seller a Question

We have been selling books online to tens of thousands of satisfied customers for more than 20 years. Thank you for your business. We look forward to serving your book buying needs. Feel free to ask us any questions about our listings or if you want to know if we can get a book for you that we do not presently have listed.