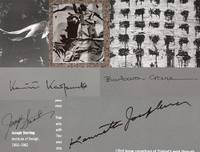 Chicago, IL: Stephen Daiter Gallery, 2003. First Edition. First Printing.. Softcover. Fine/Fine Dust Jacket.. Chicago, IL: Stephen Daiter Gallery, 2003. Softcover. Fine/Fine. First Edition/First Printing. 32 pages. Landmark Exhibition Catalog. The first and only edition. Published in a small and limited print run as a softcover original only. Precedes and should not be confused with the book-length centenary book, "Siskind 100", published in October 2003. There is no ISBN. The Exhibition Catalog is now scarce. A brilliant production by David W. Williams: Regular-sized volume format. Pristine-white softcovers, as issued. Photographs by Aaron Siskind. Introduction by Stephen Daiter. Text contributions by Barbara Crane, Jed Fielding, Joseph Jachna, Kenneth Josephson, Kazimir Karpuszko, and Joseph Sterling, who were all students of Aaron Siskind, and are now among the finest American photographers of our time. List of Plates appended at the end. Printed on pristine-white, thick coated stock paper in the United States to the highest standards. The printing quality is outstanding, worthy of the work that it celebrates. In integral pictorial DJ with titles on the cover and spine and very large flaps, as issued. Published on the occasion of the photographer's centenary exhibition held at the Stephen Daiter Gallery Chicago from May 2 through June 28, 2003 in conjunction with the Galerie Francoise Paviot Paris, where the show travelled on in November 2003. Presents "Aaron Siskind: Order With The Tensions Continuing". Abstract photographs from the late 1940's to the early 1960's by the one photographer who is credited with having brought photography into the 20th century. The title comes from one of Aaron Siskind's most celebrated works. Siskind started out as a documentary photographer and was one of the finest photographers associated with The Photo League, which aimed to marry street and art photography with social concerns and moral conscience. It is also widely acknowledged, however, that his most important artistic output resulted from his crucial shift to Abstract Expressionism. The Abstract Expressionists considered Siskind's abstract photographs not only to be on the same level as their work in the traditional media (primarily, painting) . Precisely because Siskind continued to work in photography, he introduced a whole new dimension to the Movement that they themselves did not conceive possible, and Siskind consequently influenced them as much as they influenced him. These photographs are now between 40 and 60 years old, but they have lost none of their cutting-edge vitality, breadth of imagination, and formal elegance. They are "at once sensual, intellectual, and spiritual, and provide a powerful expression of his artistic vision" (Stephen Daiter) . An absolute "must-have" title for Aaron Siskind collectors. <b><i> This copy is very prominently and beautifully signed in black ink-pen on their respective Contributions by Barbara Crane, Kenneth Josephson, Kazimir Karpuszko, and Joseph Sterling. They all signed directly on the page itself, not on a tipped-in page. This title is a contemporary art photography classic. As far as we know, this is the only such multi-signed copy of the Exhibition Catalog available online and is in especially fine condition: Clean, crisp, and bright, a pristine beauty. A rare signed copy thus. </b></i> 21 tonally rich reproductions. One of the greatest artist/photographers of the 20th century. A fine copy. (SEE ALSO OTHER AARON SISKIND TITLES IN OUR CATALOG).

crisp
A term often used to indicate a book's new-like condition. Indicates that the hinges are not loosened. A book described as crisp...[more]
First Edition
In book collecting, the first edition is the earliest published form of a book. A book may have more than one first edition in...[more]
spine
The outer portion of a book which covers the actual binding. The spine usually faces outward when a book is placed on a shelf....[more]
fine
A book in fine condition exhibits no flaws. A fine condition book closely approaches As New condition, but may lack the...[more]
flap(s)
The portion of a book cover or cover jacket that folds into the book from front to back.  The flap can contain biographical...[more]
New
A new book is a book previously not circulated to a buyer. Although a new book is typically free of any faults or defects,...[more]
jacket
Sometimes used as another term for dust jacket, a protective and often decorative wrapper, usually made of paper which wraps...[more]