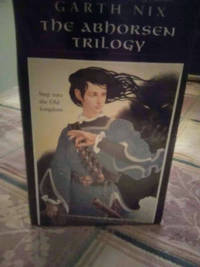 "The protagonist, Sabriel, is in her final few days at her school in Ancelstierre (an alternate history of 1910s England), when she is visited by a spirit summoned by her father (the Abhorsen), who is trapped in Death and departs to rescue him. Accompanied by her father's assistant Mogget, she discovers Touchstone; and with him continues to Belisaere (the capital of the Old Kingdom). In a sacred site under the city, Sabriel briefly frees her father, who diverts the antagonist Kerrigor while the others escape..."

"The protagonist, Lirael, is raised among the Clayr; but having coal-black hair, a pale complexion, and brown eyes, differs physically from her chestnut-skinned, white-blonde, blue or green-eyed peers, and additionally lacks their native precognition. While trying to make a canine sending, she accidentally summons the immortal 'Disreputable Dog', thereafter her constant companion. In Ancelestierre, Prince Sameth (the son of Sabriel and Touchstone) is attacked by the necromancer Hedge and his summoned Dead Hands a zombie-like..."

"The Abhorsen's House is besieged by Dead Hands led by Chlorr of the Mask (an undead sorceress) under the control of the necromancer Hedge. Hedge himself serves Orannis the Destroyer, an immortal imprisoned millennia prior by 7 of its 8 cohorts and now desirous to destroy the biosphere. The protagonists escape the siege through a well-like opening, in whose adjoined tunnel they encounter the spirit 'Astarael' (the originator of the Abhorsens' power). Meanwhile, Prince Sameth's parents, the Abhorsen Sabriel and King Touchstone,..."

Pontaccio takes pride in accurate descriptions, careful wrapping and quick shipping. A considerable amount of time and care is taken to produce the clearest, most detailed photographs and descriptions of our books so that the book-buying process is as rewarding and pleasurable as it should be.

Please Note: All shipping costs are based on an average sized book. If an item is both over sized and heavy, there will be an extra charge for Priority Mail or for shipping outside the United States.

Our international "expedited rate" is quoted from USPS Flat rate Priority Envelope rate for that country; therefore, if you order a multi-volume title or a book too large for the envelope, we will contact you after your purchase to let you know what additional shipping charges need to be applied.

Seller rating:
This seller has earned a 5 of 5 Stars rating from Biblio customers.
Biblio.com member since: 2018
KENT, Connecticut
Ask Seller a Question