Home The Lawbook Exchange Ltd An Abridgment of the First Part of My Ld. Coke's Institutes.. 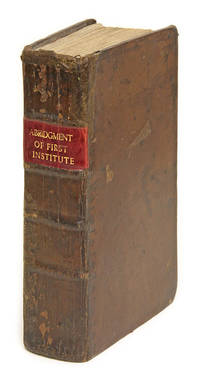 An Abridgment of the First Part of My Ld. Coke's Institutes..

An Abridgment of the First Part of My Ld. Coke's Institutes..

1714. London, 1714. 2nd. ed.. London, 1714. 2nd. ed. A Popular Abridgment of Coke on Littleton Coke, Sir Edward [1552-1634]. Hawkins, William [1673-1746], Editor. An Abridgment of the First Part of My Ld. Coke's Institutes; With Some Additions Explaining Many of the Difficult Cases, And Shewing in What Points the Law has Been Altered by Late Resolutions and Acts of Parliament. To Which is Added, A Large Index in the Nature of an Analysis, Of the Most General Heads. London: Printed for J. Walthoe, 1714. [ii], vi, 495, [105] pp. Title page preceded by one-page publisher advertisement. 12mo. (6-1/4" x 3-3/4"). Contemporary calf, blind rules to boards, blind fillets along joints, raised bands and recent lettering piece to spine, repair to head of spine. A few minor nicks and scuffs, moderate rubbing to extremities, small chip to head of spine, corners bumped and somewhat worn, rear hinge cracked. Moderate toning to text, somewhat heavier in places, faint dampstaining to a few leaves, owner signature to front free endpaper dated 1757, numerous annotations in identical hand to margins. $950. * Second edition. One of the most popular abridgements of Coke's First Institutes (Coke on Littleton) in the eighteenth century, with some eight editions by 1751, as well as a later Dublin edition in 1792 and a London edition in 1822. Most of the annotations are references to cases in the reports of Coke, Rolle and other jurists, the others are brief glosses. Early editions of this work are rare. OCLC locates 3 copies of the second edition at Amherst College, the Huntington Library and the National Library of Scotland. The ESTC adds the Free Library of Philadelphia and the William Salt Library. English Short-Title Catalogue T163340.

hinge
The portion of the book closest to the spine that allows the book to be opened and closed.
calf
Calf or calf hide is a common form of leather binding.  Calf binding is naturally a light brown but there are ways to treat... [More]
raised band(s)
Raised bands refer to the ridges that protrude slightly from the spine on leather bound books.  The bands are created... [More]
cracked
In reference to a hinge or a book's binding, means that the glue which holds the opposing leaves has allowed them to separate,... [More]
12mo
A duodecimo is a book approximately 7 by 4.5 inches in size, or similar in size to a contemporary mass market paperback.... [More]
title page
A page at the front of a book which may contain the title of the book, any subtitles, the authors, contributors, editors, the... [More]
rubbing
Abrasion or wear to the surface. Usually used in reference to a book's boards or dust-jacket.
spine
The outer portion of a book which covers the actual binding. The spine usually faces outward when a book is placed on a shelf.... [More]
leaves
Very generally, "leaves" refers to the pages of a book, as in the common phrase, "loose-leaf pages." A leaf is a single sheet... [More]