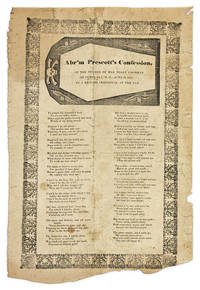 Abr'm Prescott's Confession of the Murder of Mrs. Sally Cochran..

Abr'm Prescott's Confession of the Murder of Mrs. Sally Cochran..

by Broadside; Murder; Private Individual at the Bar

1836. Concord, NH?, 1836.. Concord, NH?, 1836. "Oh! Lust, Accursed Lust! 'Twas This for Which I Did the Deed" [Broadside]. [Murder]. Private Individual at the Bar. Abr'm Prescott's Confession of the Murder of Mrs. Sally Cochran of Pembroke, N.H.--June 23, 1833. [Concord, NH.?]: S.n., 1836. 17" x 11-1/2" broadside. Two-columns of verse in twenty stanzas within woodcut ornamental border, text headed by large woodcut vignette of a coffin. Light browning and a few minor stains, faint horizontal and vertical fold line, chipping to edges, section lacking from bottom margin, just touching bottom right corner of border, a few tears along fold lines with no loss to text, later repairs to verso. $2,500. * Abraham Prescott was found guilty of the murder of Sally Cochran in two separate trials held in Concord in September 1834 and September 1835. Despite a well-crafted insanity defense, he was sentenced to be hanged on December 23, 1835, in Hopkinton, New Hampshire. The execution was postponed to January 6, 1836. The verse account in this broadside presents the murder as a crime of passion: "Oh! lust, accursed lust! 'twas this for which I did the deed; Forfeiting heaven, and life, and bliss, Forfeiting all I need." See McDade, The Annals of Murder 769. OCLC locates 7 copies (American Antiquarian Society, Brown, Dartmouth, Harvard, Peabody Essex Museum, University of Michigan, Yale).

verso
The page bound on the left side of a book, opposite to the recto page.
vignette
A decorative design or illustration placed at the beginning or end of a ... [More]
edges
The collective of the top, fore and bottom edges of the text block of the book, being that part of the edges of the pages of a... [More]
New
A new book is a book previously not circulated to a buyer. Although a new book is typically free of any faults or defects,... [More]
chipping
A defect in which small pieces are missing from the edges; fraying or small pieces of paper missing the edge of a paperback, or... [More]