Join us June 2–June 4, 2022 for our second virtual antiquarian book fair!
Preregister now for Biblio.live and get $10 to use at the fair.
Home Rare Books Antique & Collectible Books More Rare Books from Schilb Antiquarian Rare Books An abstract of the evidence delivered before a select committee of the House of Commons in the years 1790 and… 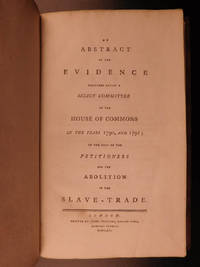 An incredibly rare 1791 printing of British Parliament's abstract describing the regulations made against slave trade in West Africa. Groups of anti-slavery American colonists were seeking to end slavery both in North American and in England and did so by trying to expose the inhumane treatment and transportation of slaves. Anti-slave advocates were fighting a difficult battle, but none more so than that of economic stimulus.

Slavery and slave planters promised to increase economic growth in both American and in Great Britain. Abolitionists were seeking other means, through African trade, other than trading humans claiming that Africa provided a wealth of goods other than slaves. (Austin/Smith).

This pamphlet, collected by William Wilberforce, includes these discussions and more – an incredibly rare and early piece of anti-slavery propaganda!

Seller rating:
This seller has earned a 5 of 5 Stars rating from Biblio customers.
Biblio.com member since 2018
COLUMBIA, Missouri
Ask Seller a Question