Home Lindenlea Books According to Jake and the Kid: a Collection of New… 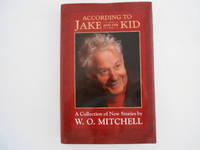 According to Jake and the Kid: a Collection of New Stories By W.O. Mitchell (signed)

According to Jake and the Kid: a Collection of New Stories By W.O. Mitchell (signed)

W.O. Mitchell , the only Canadian author recognizable by initials alone, was born in Weyburn, Saskatchewan in 1914. Educated at the University of Manitoba, he lived most of his life in Saskatchewan, Ontario, and Alberta, where for many years he was the most renowned resident in High River. He and his wife, Merna, subsequently moved to Calgary. During a very varied career Bill Mitchell travelled widely and was everything from a Depression hobo to the fiction editor of Maclean ’ s . A gifted teacher, he was visiting professor at the University of Windsor for several years, and a creative writing instructor at the Banff Centre for many summers. His best-loved book is Who Has Seen the Wind . Since its publication in 1947 it has sold over half a million copies in Canada alone, and is hailed as the greatest Canadian book on boyhood. The classic edition, illustrated by William Kurelek, became a bestseller in 1991. Complementing that book is his 1981 best-seller How I Spent My Summer Holidays , hailed by some critics as his finest novel, although Since Daisy Creek (1984) and Ladybug, Ladybug …(1988), Roses Are Difficult Here (1990), For Art's Sake (1992) and The Black Bonspiel of Willie MacCrimmon (1993), illustrated by Wesley W. Bates, were also well-received best-sellers. Besides The Kite (1962) and The Vanishing Point (1973), he was also noted for his two collections of short stories, Jake and the Kid (1962) and According to Jake and the Kid (1989). Based on the legendary CBC radio Series, both classic story collections won the Stephen Leacock Medal for Humour. His last book, An Evening with W.O. Mitchell , contains his most popular performance pieces, and concludes with “The Poetry of Life”, the lecture that he delivered from a wheelchair to The Writers’ Union Conference in Winnipeg in 1996. A noted performer of his own work, W.O. Mitchell recorded cassette versions of both Who Has Seen the Wind and According to Jake and the Kid , while a selection of pieces from An Evening with W.O. Mitchell , performed by W.O., is also available on cassette. Our novelist and script-writer was also a successful playwright whose five plays are included in the collection entitled Dramatic W.O. Mitchell . He was made an Officer of the Order of Canada in 1973, and was an honorary member of the Privy Council. He was the subject of a National Film Board documentary, and in 1994 he was awarded the Writers Guild of Alberta Golden Pen Award for Lifetime Achievement. In 1996 the City of Calgary named its book prize in his honour. He was, in Pierre Berton’s words, “an original.” W.O. Mitchell died in February 1998 at his home in Calgary.

We guarantee the condition of every book as it is described. If you are not satisfied with your purchase or if the order hasn't arrived, you are eligible for a refund within 30 days of the estimated delivery date.

Seller rating:
This seller has earned a 5 of 5 Stars rating from Biblio customers.
Biblio.com member since: 2019
Ottawa, Ontario
Ask Seller a Question

We are located in Ottawa (Ontario, Canada), and started selling books online in 2009. We offer a wide range of topics, with a focus on signed modern Canadian first editions. Please feel free to contact us by email if you have a question regarding any of our books.

First Edition
In book collecting, the first edition is the earliest published form of a book. A book may have more than one first edition in...[more]
spine
The outer portion of a book which covers the actual binding. The spine usually faces outward when a book is placed on a shelf....[more]
ffep
A common abbreviation for Front Free EndPaper. Generally, it is the first page of a book and is part of a single sheet that...[more]
fine
A book in fine condition exhibits no flaws. A fine condition book closely approaches As New condition, but may lack the...[more]
title page
A page at the front of a book which may contain the title of the book, any subtitles, the authors, contributors, editors, the...[more]
tight
Used to mean that the binding of a book has not been overly loosened by frequent use.