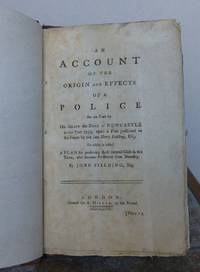 AN ACCOUNT OF THE ORIGIN AND EFFECTS OF A POLICE Set on Foot by His Grace the Duke of Newcastle in the Year 1753, Upon a Plan Presented to His Grace by the late Henry Fielding, Esq.,

AN ACCOUNT OF THE ORIGIN AND EFFECTS OF A POLICE Set on Foot by His Grace the Duke of Newcastle in the Year 1753, Upon a Plan Presented to His Grace by the late Henry Fielding, Esq.,

London, A. Millar, in the Strand, 1758.. To which is added A PLAN for preserving those deserted Girls in this Town, who become Prostitutes from Necessity. FIRST EDITION 1758, Pamphlet, 8vo, 220 x 125 mm, 8¾ x 5¼ inches, pages: xiii, [1], 15-64, pages 61-64 contain the List of Subscribers "Towards cloathing friendless and deserted Boys to go on Board His Majesty's Ships", bound in modern quarter calf over new marbled sides, vellum corner tips, gilt lettered red morocco label to upper cover, new endpapers, fore-edges not trimmed. Title page lightly browned, final page slightly dusty, otherwise contents clean and bright. A very good copy. Henry Fielding (1707 1754) the author of the famous novel Tom Jones was a magistrate and aside from his literary achievements, he has a significant place in the history of law-enforcement, having founded (with his half-brother John) what some have called London's first police force, the Bow Street Runners, using his authority as a magistrate. The pamphlet describes their plans for ridding London of violent gangs, for dealing with the problems of beggars and homeless boys and girls, and gaming in public houses. sir John Fielding was a notable English magistrate and social reformer of the 18th century. He was also the younger half-brother of novelist, playwright and chief magistrate Henry Fielding. Despite being blinded in a navy accident at the age of 19, John set up his own business and, in his spare time, studied law with Henry. Appointed Henry's personal assistant in 1750, John helped him to root out corruption and improve the competence of those engaged in administering justice in London. They formed the first professional police force, the Bow Street Runners. Through the regular circulation of a police gazette containing descriptions of known criminals, Fielding also established the basis for the first police criminal records department. When Henry died in 1754, John was appointed magistrate at Bow Street in his place, becoming renowned as the "Blind Beak", and allegedly being able to recognize three thousand criminals by the sounds of their voices. He also continued to develop his ideas on crime prevention and youth employment, helping to found the Asylum for Orphan Girls in Lambeth in 1758. He was knighted in 1761. See: The Kress Library of Business and Economics, Volume 1, page 282, No. 5687; Catalogue of the Goldsmith's Library of Economic Literature, Volume 1, page 465, No. 9402; ESTC T76187. MORE IMAGES ATTACHED TO THIS LISTING, ALL ZOOMABLE, FURTHER IMAGES ON REQUEST. POSTAGE AT COST.

morocco
Morocco is a style of leather book binding that is usually made with goatskin, as it is durable and easy to dye. (see also...[more]
vellum
Vellum is a sheet of specialty prepared skin of lamb, calf, or goat kid used for binding a book or for printing and writing. ...[more]
gilt
The decorative application of gold or gold coloring to a portion of a book on the spine, edges of the text block, or an inlay in...[more]
calf
Calf or calf hide is a common form of leather binding.  Calf binding is naturally a light brown but there are ways to treat...[more]
New
A new book is a book previously not circulated to a buyer. Although a new book is typically free of any faults or defects,...[more]
First Edition
In book collecting, the first edition is the earliest published form of a book. A book may have more than one first edition in...[more]
title page
A page at the front of a book which may contain the title of the book, any subtitles, the authors, contributors, editors, the...[more]