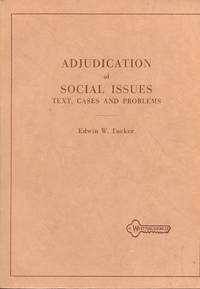 St. Paul, MN: West Publishing, 1971. Second Reprint, 1973 . Soft cover. New/None as Issued. BRAND NEW COPY w/trace wear to softcover. "As the selected arbiter in social, economic, and political confrontations courts have spoken out on such issues as the rights of the poor, the shelter deprived, the young, the student, the activist, the debtor, the consumer, the conscientious objector, and discrimination against non-whites. Simultaneously called upon to respond favorably to the supporters and opponents of a new ordering of rights and duties judges have been obliged to probe questions dealing with abortion, family planning, sexual morality, forms of sexual behavior, privacy, welfare rights, women's rights, pollution, obscenity, drug addiction, alcoholism, political representation, and the right to criticize public officials. Judicial response has been marked by abandonment of long established legal principles and espousal of new legal doctrines. Courts have proceeded to fashion freshly designed procedures to facilitate enforcement of their newly announced substantive rules." [Preface, in part, 1971] Text in 5 parts: I, Judicial Administration; II, Life & the Quality of Life; III, Personal Liberties; IV, Individualism; V, Consumers & Debtors; and V, The Poor. 214 (+ IX) pages, with cases, and Index. Covers show scant shelf use, and partial creases at backstrip; name of prior owner penciled on front endpaper; text is strong and clean.

If a book is damaged or lost in shipment, refund of book cost and postage is guaranteed. If a book is physically not as described in our posting, book cost and round-trip postage are refunded on the book�s return.

Seller rating:
This seller has earned a 5 of 5 Stars rating from Biblio customers.
Biblio.com member since: 2004
Berkeley, California
Ask Seller a Question

reprint
Any printing of a book which follows the original edition. By definition, a reprint is not a first edition.
Poor
A book with significant wear and faults. A poor condition book is still a reading copy with the full text still readable. Any...[more]
New
A new book is a book previously not circulated to a buyer. Although a new book is typically free of any faults or defects,...[more]