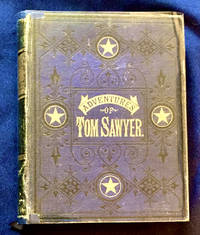 THE ADVENTURES OF TOM SAWYER; By Mark Twain

THE ADVENTURES OF TOM SAWYER; By Mark Twain

Hartford, Conn. Chicago, Ill. Cincinnati, Ohio: The American Publishing Company, 1881. Early Reprint of the First American Edition. Pictorial cloth. Good -/None [Clear polyester sleeve added]. B&W stereotyped engravings. Tall 8vo (8 3/4" x 7") , publisher's first edition format of full decorative dark blue (near purple) cloth over boards with gilt lettering and panels on spine with title surrounded by FOUR stars with five points stamped in gilt on front cover (a binding variant [see below]), plus decorative blind-stamping on both covers; illustrated with stereotyped engraved frontispiece of Tom Sawyer plus more than 100 B&W chapter headings & in-text vignettes, black ribbon page-marker, [xii], 274, [275 "Conclusion," 276 blank] pages [edges plain]. No ads at rear. A Great American Classic by the inimitable Mark Twain. Originally published using this dark blue gilt-laden and ilustrated large octavo format by the same American Publishing Company, Hartford, in 1876. <br/><br/>This classic book has become the quintessential tale of American boyhood following Twain's creation of one of the most memorable characters in American literature. The Adventures of Tom Sawyer is also interwoven with autobiographical elements that have been transposed, embellished and made melodramatic. The lively and often amusing work is also a splendid recreation of mid-nineteenth century riverfront life along the Mississippi.<br/><br/>This is an early 1881 reprint of the 1876 edition. Publisher's records indicate that the first edition ended in 1879. At that time, American Publishing in Hartford reprinted the 1876 third printing (BAL, Vol. 2, p.189). <br/><br/>Wm. M. McBride, Mark Twain Bibliography: Memorial & Stowe-Day Foundation, p.44 lists 1883ff. reprints by The American Publishing Company but NOT this seemingly more scarce 1881 imprint. Similarly, the 1881 reprint is NOT included in the many editions listed in the Samuel L. Clemens "Mark Twain" catalgue No.47 by Second Life Books, p.13; nor is this edition mentioned in either Heritage Catalogue 130 (p.18, noting the 1884 ed.); nor does it appear in Catalogue One / Alan J. Fox., p.33. <br/><br/>This copy has a SCARCE early binding variant. In Vol. 2, pp.189 (column 1) & [191], Blanck discusses and then illustrates our variant with FOUR stars surrounding the title on front cover, rather than the first edition binding which has TWO stars above and below the title, and TWO "goldstamped be-rayed stylized chrysanthemums" with scalloped edges on both sides of the title. Blanck observes that our variant binding "thus far, has been noted only on an 1877 reprint" (p.[191]. (First Editions in VG condition currently sell for more than $10,000.) <br/><br/>We note that the preliminary pages (e.g., front endpapers, Preface, half title, Table of Contents, Illustrations, blanks) of the American Publishing reprints after the Third edition have page counts that vary. Some early copies have misnumbering (e.g., BAL "Second Printing, Issue A"); others have xii or xvi pages. Our preliminary front endpapers are unnumbered and total only [xii]. <br/><br/>Overall, a pleasing and affordable copy of this Very Important American Classic in dark blue cloth, many clean and well imprinted illustrations, and an interesting binding variant. <br/><br/>Bookplate of previous owner (with brief ink notation) on front pastedown. Cloth has moderate wear with rubbing to joints, edges, and corners; and light soil with fading to gilt. Rebacked copy with backstrip (90%+ complete) laid down on new blue cloth. Endpapers have been reinforced with closely matching binder's tape, so the hinges are holding nicely. Light foxing to pastedown and FFEP. Text is moderately and uniformly toned with the occasional smudge, crease, and light wear. The preliminary leaf listing illustrations has loosened. The text pages and illustrations are nearly free of foxing, though one can detect the occasional speck. <br/><br/>We are unable to determine whether our reprint is supposed to have [xii] or [xvi] preliminary leaves following the list of illustrations and preceeding the frontispiece and page numbered "1." There is offsetting with toning affecting 3/4's of pages 30-31 that has evidently been caused by a now removed piece of paper [newspaper?].

The Adventures of Tom Sawyer, by Mark Twain, is a popular 1876 novel about a young boy growing up in the antebellum South on the Mississippi River in the town of St. Petersberg, based on the town of Hannibal, Missouri.

This Book about a kid with a Extraordinary adventures.

Seller rating:
This seller has earned a 5 of 5 Stars rating from Biblio customers.
Biblio.com member since: 2015
Lake Forest, Illinois
Ask Seller a Question

rebacked
having had the material covering the spine replaced. ...[more]
BAL
Bibliography of American Literature (commonly abbreviated as BAL in descriptions) is the quintessential reference work for any...[more]
New
A new book is a book previously not circulated to a buyer. Although a new book is typically free of any faults or defects,...[more]
rubbing
Abrasion or wear to the surface. Usually used in reference to a book's boards or dust-jacket.
gilt
The decorative application of gold or gold coloring to a portion of a book on the spine, edges of the text block, or an inlay in...[more]
octavo
Another of the terms referring to page or book size, octavo refers to a standard printer's sheet folded four times, producing...[more]
First Edition
In book collecting, the first edition is the earliest published form of a book. A book may have more than one first edition in...[more]
half title
The blank front page which appears just prior to the title page, and typically contains only the title of the book, although, at...[more]
ffep
A common abbreviation for Front Free EndPaper. Generally, it is the first page of a book and is part of a single sheet that...[more]
leaves
Very generally, "leaves" refers to the pages of a book, as in the common phrase, "loose-leaf pages." A leaf is a single sheet...[more]
reprint
Any printing of a book which follows the original edition. By definition, a reprint is not a first edition.
spine
The outer portion of a book which covers the actual binding. The spine usually faces outward when a book is placed on a shelf....[more]
VG
Very Good condition can describe a used book that does show some small signs of wear - but no tears - on either binding or...[more]
Cloth
"Cloth-bound" generally refers to a hardcover book with cloth covering the outside of the book covers. The cloth is stretched...[more]
edges
The collective of the top, fore and bottom edges of the text block of the book, being that part of the edges of the pages of a...[more]