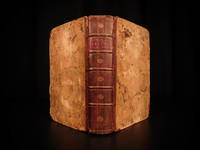 Joel Barlow was an important 18th-century American diplomat who wrote several controversial treatises and pamphlets in which he supported the French Revolution. One such work was 'Advice to the Privileged Orders'. First published in 1792, this work was Barlow working through his promotion of the Revolution, offering advice who were seeking to understand answers against the government. This work became closely associated with Thomas Paine's 'Rights of Man', and the two were often studied in conjunction with one another.

This volume includes Barlow's important treatise as well as other curious 18th-century pamphlets such as:

· Samuel Child, 'Every Man His Own Brewer'

· Herbert Croft, 'The Abbey of Kilkhampton'

· Jean Maury, John Lake; "The Principles of Eloquence, adapted to the pulpit and the bar."

· Collation: Complete with all pages; 5 works in 1

o 'Advice to the Privileged Orders…'

o 'Every Man His Own Brewer'

o 'The Abbey of Kilkhampton'

o 'The Principles of Eloquence'

Seller rating:
This seller has earned a 5 of 5 Stars rating from Biblio customers.
Biblio.com member since: 2018
COLUMBIA, Missouri
Ask Seller a Question

G
Good describes the average used and worn book that has all pages or leaves present. Any defects must be noted. (as defined...[more]
tight
Used to mean that the binding of a book has not been overly loosened by frequent use.