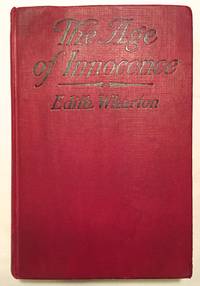 The Age of Innocence

The Age of Innocence

*Please Note: In mid 2016, this book had minor work performed to mend a 1-inch detached tear at the spine head exposing the top of the textblock signatures that the previous owner attempted to mend or keep intact with scotch tape, all of which was removed and repaired. Some edge wear and nicks on the hardcovers were also touched up. The repair work was performed by Eidolon House, a notable bindery, to merely conserve the book and not fully restore it.*

A true 1st edition, 1st printing! Copyright 1920, published by Appleton and Company (New York). First printing with a (1) at the bottom of page 365 and page 186, line 7 reads "Forasmuch as it hath please Almighty God," with later printings having been changed to "Dearly beloved, we are gathered together here." No dust jacket is available. Deep red hardcovers have lightly bumped corners and edges, with only minor wear-through on the foreedge corners. A previous 1" x 1/2" fade on the front cover from a previous sticker was touched up during repair. There is minimal fading and nicks on the spine and wear to the hinges. The front pastedown has a ripple or thin-line bubble that resonates a wrinkle from the first page through page 25. The textblock has some smudges (primarily the foreedge) and light foxing. There was a nick to the top of the textblock that left nicks on the top of pages 339 to 365. Although the pages are lightly tanning, the binding is tight. A few pages have foxing at the corners and page 43-44 has a dog-ear, but there is no writing or markings in the book. Overall, this true first printing of this Pulitzer Prize winning classic is in Very Good Plus (VG+) condition. Please see the photos on this item or feel free to send us any questions you might have. We can send photos of the book before the work was done if desired. Also, we've included photos but if you need more, please contact us. Please note: this item will ship insured and require a signature upon delivery. Thank you for your interest in this item!

Read more: Identifying first editions of The Age of Innocence

30 day return guarantee, with full refund including original shipping costs for up to 30 days after delivery if an item arrives misdescribed or damaged. Orders can be cancelled up until they are shipped.

Seller rating:
This seller has earned a 5 of 5 Stars rating from Biblio customers.
Biblio.com member since: 2017
Aurora, Colorado
Ask Seller a Question

At Bronze Anthology LLC, we specialize in Booksets, as well as vintage and specialty books to include 20th Century and Science Fiction. Feel free to check back often as we have new arrivals each and every week.

tight
Used to mean that the binding of a book has not been overly loosened by frequent use.
jacket
Sometimes used as another term for dust jacket, a protective and often decorative wrapper, usually made of paper which wraps...[more]
spine
The outer portion of a book which covers the actual binding. The spine usually faces outward when a book is placed on a shelf....[more]
edges
The collective of the top, fore and bottom edges of the text block of the book, being that part of the edges of the pages of a...[more]

More books like this are on sale from Bronze Anthology LLC at 25% off!