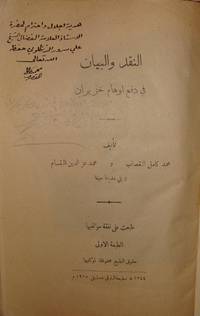 Damascus: al- Tarakki press, 1925 Book. Very Good. Hardcover. Signed by Author(s). 1st Edition. 8vo - over 7¾ - 9¾" tall. Arabic text on the behavior during funerals in Islam in 140 p. Title page with dedication signed by Muhammad Kamil al qassab to Ali Surour al Zankalouni (one of the concerned Ulema in this declaration and one of the scholars in al Azhar University). Modern fine hard cover binding. The book is the only work by the tow Sheikhs, al Qassam and al Qassab during their deport life in Haifa in Palestine. The book is a critique of tow mufti's legal openion in Haifa regarding the behavior during funerals in Islam. Sheikh Muhammad Iz ad-Din al Qassam was a controversial Arab militant in the British Mandate of Palestine. He was was born in Jableh, Syria, in the northern Latakia Governorate, son of a teacher and adherent of the Qadari Sufi order. He was educated at al-Azhar University. Upon his return he became a teacher and an imam at the local mosque. After Italy's 1911 invasion of Libya, al-Qassam declared a Jihad and collected funds for Libyan resistance, as well as composing a victory anthem. He enlisted dozens of volunteers and set out for Libya, but was detained and ordered home by the Ottoman authorities. He enlisted in the Ottoman army when World War I broke out where he received military training and was attached as a chaplain to a base near Damascus. Returning home before the war's end, al-Qassam organised a local defence force to fight the French, but French-incited internecine infighting led him and several of his followers to head into the mountains to prepare for a guerilla offensive. Al-Qassam was a key figure in the 1921 Syrian revolt against the French when Faisal I declared his kingdom of Greater Syria in Damascus and was sentenced to death after its failure. After the French besieged the city, he fled via Beirut to Haifa, then under the British Mandate, where his wife and daughters later joined him. Already in his forties, he concentrated his activities on the lower classes, setting up a night school for casual labourers and preaching to them as imam in the Istiqlal mosque, and he would seek them out on the streets and even in brothels and hashish dens. His greatest following came from the landless ex-tenant farmers drifting in to Haifa from the Upper Galilee where purchases of agricultural land by the Jewish National Fund and labour policies excluding Arabs had dispossessed many of their traditional livelihoods. He was also a prominent member of the Young Men's Muslim Association. Associated with the Istiqlal party (Independence Party), his activities were financed by several well-off businessmen due to his spreading reputation. In 1929 he was appointed the marriage registrar in Mufti Amin al-Husayni's Supreme Muslim Council Sharia court in Haifa, a role that allowed him to tour the northern villages, whose inhabitants he encouraged to set up agricultural cooperatives. In November 1935, fearing arrest after a British constable had been killed in a skirmish with some of his followers, al-Qassam and twelve of his men left Haifa to hide out in the hills between Jenin and Nablus, spending ten days on the move, during which they were fed by local villagers. When two of his men engaged in a firefight with a Palestine police patrol hunting fruit thieves in which a Jewish policeman was killed, British police launched a manhunt and surrounded al-Qassam in a cave near Ya'bad. In the ensuing battle, al-Qassam was killed. The manner of his last stand assumed legendary proportions in Palestinian circles at the time: 'Surrounded he told his men to die as martyrs, and opened fire. His defiance and manner of his death (which stunned the traditional leadership) electrified the Palestinian people. Thousands forced their way past police lines at the funeral in Haifa, and the secular Arab nationalist parties invoked his memory as the symbol of resistance. (Wikipedia). For the biography of M. Kamil al Qassab, see: James L. Gelvin p. 91 and later: Nationalism and mass politics in Syria at the close of empire..

fine
A book in fine condition exhibits no flaws. A fine condition book closely approaches As New condition, but may lack the...[more]
title page
A page at the front of a book which may contain the title of the book, any subtitles, the authors, contributors, editors, the...[more]