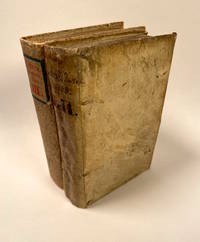 by Manutius, Paulus (a.k.a. Paolo Manuzio)

Venice: Domenico Giglio; Paolo and Aldo Manutius, 1564. Good. Ad 1: 8vo. Part 1: [1], 2-138, [4] = 142 ff. Part 2: [1], 2-122, [2] = 124 ff. Contemporary limp vellum with "yapp" edges, title in MS on spine, singular "1" at bottom of spine indicating the first of two volumes, small abraisons on free endleaves from leather ties (no longer present). Date of 1742 written next to printer's device on Part 1 title. 2nd occurrence of f. 89 has creased corner, small tear on 2nd occurrence of f. 23. Ad 2: 8vo. [4], 9-214, [6] = 216 ff. Contemporary paper boards, MS number "4247" on spine, singular "2" at bottom of spine indicating the 2nd of two volumes, pasted title in red MS with blue paper border on spine. Title with fore-edge margin extended, final leaf (Register / Aldine anchor on verso) repaired and with margins partially extended. An excellent example of a 16th-century Italian "temporary" binding (no doubt original) which perfectly reveals its construction. The textblock (Lib. 1-2) is sewn onto 4 alum-tawed supports (one at head and tail). As commonly, these straps are laced outside the limp vellum "wrapper" along the joints, and then back inside where they have remained unattached for more than 450 years. There is evidence of two pair of leather ties (one small fragment remains). The bespoke "forwarding" may have been done at the Giglio printshop or by a Venetian bindery closely associated with it. Of additional bibliographic interest are the nine different paper stocks utilized for printing this copy, which are clearly discerned along the lower edge of the textblock. Lib. 3 was printed (and largely written) by Paolo Manuzio (Paulus Manutius); the text is bound in 18th- or early 19th-century stiff boards with pronounced raised joints. In this instance the textblock was sewn on two cords, without endbands. The upper cover is inscribed: "Questo terzo volume accompagna l'edizione del Giglio 1558" suggesting that these two books have been together for many years. The provenance of this set is notable: a sixteenth-century inscription on the title-page reads "Guliani de Eherys" (i.e. Eherus). This is a Northern European (perhaps even Estonian) name, and thus the present volume exhibits the incredibly wide influence of Aldine editions. The armorial bookplate of the Princes of Liechtenstein are pasted inside the covers of both volumes. The text contains correspondence to/from Lorenzo de Medici, Giovanni de Medici-later Pope Leon, Francesco Maria Duca de Urbino, Cardinal Bembo, Michelagnolo Buonarroti, Annibal Caro, Dona Isabetta, Pietro Aretino, Boccaccio to la Fiammetta, and Francesco Petrarca, among others. Paolo Manuzio (1512-1574) is the third son of the famous Venetian printer Aldus Manutius, who assumed management of the Aldine Press following a four-year dispute with his uncles over its operation. Paolo's major scholarly contributions are corrected editions of Cicero's letters and orations, his own epistles (as here), and a Latin version of Demosthenes's "Philippics." Lib. 3 features the famed Dolphin and Anchor printer's device on the title-page and final leaf. Ad. 1: Adams 590. EDIT16 CNCE 25850. Ad 2: Adams 591. EDIT16 CNCE 28241.

spine
The outer portion of a book which covers the actual binding. The spine usually faces outward when a book is placed on a shelf....[more]
device
Especially for older books, a printer's device refers to an identifying mark, also sometimes called a printer's mark, on the...[more]
vellum
Vellum is a sheet of specialty prepared skin of lamb, calf, or goat kid used for binding a book or for printing and writing. ...[more]
bookplate
Highly sought after by some collectors, a book plate is an inscribed or decorative device that identifies the owner, or former...[more]
edges
The collective of the top, fore and bottom edges of the text block of the book, being that part of the edges of the pages of a...[more]