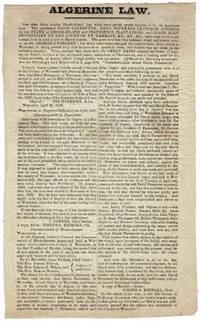 [Providence?], 1842. Broadside, 12½" x 7½", text in double column; trimmed, small hole affecting letters in 3 words (sense remains clear); very good. The "Algerine Law," passed by the Rhode Island Legislature in early April 1842, "imposed severe penalties upon those attempting to exercise power or hold office under [Dorr's] People's Constitution" of 1841. This broadside consists of an attack on the Dorrite David Parmenter, an attorney in Providence, for having been acquitted on a technicality for a charge of forgery in Worcester, Mass., in 1827. The Algerine Law rendered illegal the elections held by the Dorrites under their People's Constitution, and "made it a crime to run for office in their elections, and called it treason for anyone to do so, or to hold a statewide office under the People's Constitution. All trials arising under the Algerine Law were to come before the state's highest court, the Supreme Judicial Council, whose members had already declared themselves in favor of the old government ... On April 18, 1842, the supporters of the People's Constitution elected Dorr as governor. Two days later, the backers of the charter government reelected Governor Samuel King. In early May, both governors, as well as rival state legislatures and other officials, were sworn in. There were now two governments in Rhode Island, with the reformers in control of the northern part of the state" (see Encyclopedia.com for a nice summary). Only Brown in OCLC; DeSimone and Schofield, The Broadsides of the Dorr Rebellion, 14 (adding R.I. Historical and Providence Public); not in American Imprints.

Seller rating:
This seller has earned a 5 of 5 Stars rating from Biblio customers.
Biblio.com member since: 2006
St. Paul, Minnesota
Ask Seller a Question