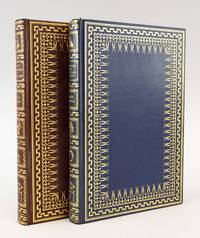 ALICE'S ADVENTURES IN WONDERLAND. [with] THROUGH THE LOOKING- GLASS

ALICE'S ADVENTURES IN WONDERLAND. [with] THROUGH THE LOOKING- GLASS

These attractively-produced private press copies of two of the best-loved works of children's literature represent the only editions to be signed by the girl for whom they were written, Alice Liddell Hargreaves (1852-1934), daughter of the dean of Christ Church, Oxford, where Charles Dodgson was a lecturer in mathematics. Dodgson became a close family friend, making up stories for the children. According to DNB, it was on a picnic on 4 July 1862 that "he invented the story of Alice in Wonderland." Over the years, Alice steadfastly refused requests to sign copies of the works, but, late in her life, and prompted by a significant monetary inducement ($1.50 per signature), she was prevailed upon to sign some volumes from the present editions; about 1,200 copies of "Wonderland" and 500 of "Looking Glass" were signed. Our volume owes its appeal in large measure to the taste and skill of typographer and designer Frederic Warde (1894-1939), who began his career as a printer with the house of William Edwin Rudge, supervised the legendary Officina Bodoni, and later did work for several American private presses..

calf
Calf or calf hide is a common form of leather binding. Calf binding is naturally a light brown but there are ways to treat the... [More]
fine
A book in fine condition exhibits no flaws. A fine condition book closely approaches As New condition, but may lack the... [More]
spine
The outer portion of a book which covers the actual binding. The spine usually faces outward when a book is placed on a shelf.... [More]
bookplate
Highly sought after by some collectors, a book plate is an inscribed or decorative device that identifies the owner, or former... [More]
morocco
Morocco is a style of leather book binding that is usually made with goatskin, as it is durable and easy to dye. (see also... [More]
gilt
The decorative application of gold or gold coloring to a portion of a book on the spine, edges of the text block, or an inlay in... [More]