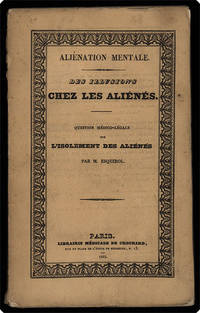 Esquirol's work on mental disorders including hallucinations and illusions, and the treatment of the same, secured him a prominence among early practitioners of forensic psychiatry. "Along with Philippe Pinel (1745–1826), Jean-Étienne Esquirol (1772–1840) is often considered one of the fathers of clinical psychiatry. While his indebtedness to the views of his teacher, Pinel, is indisputable, his own later contributions to the diagnosis and treatment of mental disorder are often considered to be clinically superior and more sophisticated than those of his mentor. Esquirol's contributions to the psychopathology of affectivity are especially important and differ in many important respects from those of Pinel, who also stressed the role of the passions in mental disorder (Louis C. Charland's entry for Esquirol in the Encyclopedia of Clinical Psychology). "Like Pinel, Esquirol did not attempt to analyze mental illness from a philosophical standpoint but sought to classify and describe the various kinds of insanity he encountered in his practice. => Esquirol coined the term 'monomania,' a concept which anticipated the modern view of schizophrenia, and he was the first to distinguish hallucination from illusion" (Heirs, emphasis ours).
Offered here is his landmark work known in English as "Observations on the illusions of the insane, and on the medico-legal question of their confinement." It originated as a "Memoire lu a l'Institut, le 1er octobre 1832" (p. 1) and is here reprinted in the first book edition from the Annales d'hygiène et de médecine légale.
Provenance: From the library of Robert Sadoff, M.D.
Searches of NUC and WorldCat locate fewer than ten U.S. libraries reporting ownership (ClobS, CLU, CtY-M, MH-M, DNLM, MnRM, CCCP, TxU-M, ViW) and COPAC finds only the copy at Cambridge. WorldCat adds one other British library reporting ownership (University of Essex).

Seller rating:
This seller has earned a 5 of 5 Stars rating from Biblio customers.
Biblio.com member since 2009
Philadelphia, Pennsylvania
Ask Seller a Question

wrappers
The paper covering on the outside of a paperback.  Also see the entry for pictorial wraps, color illustrated coverings for... [More]
unopened
A state in which all or some of the pages of a book have not been separated from the adjacent pages, caused by a traditional... [More]
Worldcat
Worldcat is a collaborative effort produced by OCLC (Online Computer Library Center) and supported and used by 72,000 libraries... [More]