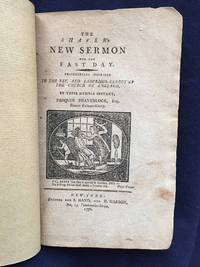 [AMERICAN HUMOR, 1796]. The Shaver's New Sermon for the Fast Day. Respectfully inscribed to the Rev. and laborious clergy of the Church of England

[AMERICAN HUMOR, 1796]. The Shaver's New Sermon for the Fast Day. Respectfully inscribed to the Rev. and laborious clergy of the Church of England

New York: S. Hand and H. Garson, 1796. Softcover. Very good. 12mo. 23, [1] pp. Crude title-page woodcut vignette, with caption: "I'll shave 'em like a punish'd soldier, DRY. No killing Swine shall make a sweeter cry." Collation: [A]6 B6. Complete. Modern sympathetic wrappers. Lightly toned, but the paper stock strong. Evidence of tape stain in two gutter margins. Early American imprint of a fake "Sermon for the Fast" which ridicules clerical, legal, political, and military "shavers." The text was attributed by Evans to John Macgowan, author of several works issued under the pseudonyms of "The Shaver" and "Pasquin Shaveblock." But Macgowan could not have written the present work as he had died in 1780, and the pamphlet first appeared in London in 1795. Furthermore, on the verso of the title-page are two "Testimonies in Favor of this Sermon," both of which were published fifteen years after Magowan's death. The one from the "Monthly Review" (1795, vol. XVI, no. 7, p. 357) reads in part: "This title-page needs little comment. The dullest reader will instantly perceive that this barber lathers with irony, and means to shave off all public fast-days with the razor of ridicule. The war, the administration, the clergy, -- all come in for a close-trimming; and the operation will be pronounced good-fun at the Goose and Grid-iron in St. Paul's Church-yard, the Crown in Bow-lane, and the Bear in Bow-street. -- The text is: 'Take unto thee a Barber's razor' (Ezek. V,1)." This copy was sold in the 1978 MS Rare Books Catalogue 20 (item 413). Since that time only one other has been on the market, namely 34 years ago, at Sotheby's London, 28 January 1986, lot 60. Â

gutter
The inside margin of a book, connecting the pages to the joints near the binding.
verso
The page bound on the left side of a book, opposite to the recto page.
12mo
A duodecimo is a book approximately 7 by 4.5 inches in size, or similar in size to a contemporary mass market paperback....[more]
vignette
A decorative design or illustration placed at the beginning or end of a ...[more]
wrappers
The paper covering on the outside of a paperback.  Also see the entry for pictorial wraps, color illustrated coverings for...[more]