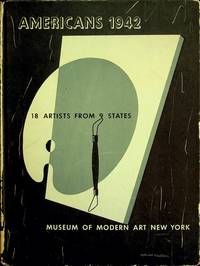 by Miller, Dorothy C., edited by

Museum of Modern Art, 1452, 1942-01-01. Hardcover. Acceptable/Missing. Museum of Modern Art [Published Date: 1942]. Hardcover, 128 pp. EX-LIBRARY copy. Catalog for exhibition by MOMA in 1942. In acceptable+ condition/ Missing dust jacket. Black, grey and white illustrated Paper over Boards have nicking and tearing to paper over edges and corners and moderate overall scuffing, aging and soiling with the color scuffed off along edges and spine. Binding tight. Usual library and ex-library markings, includes donation and library plates and stickers, call numbers, library pocket residue. Otherwise pages are lightly aged but unmarked. Features the following artists, with statements by and a black and white photo of each of the artists to accompany black and white reproductions : Darrel Austen; Hyman Bloom; Raymond Breinin; Samuel Cashwan; Francis Chapin; Emma Lu Davis; Morris Graves; Joseph Hirsch; Donal Hord; Charles Howard; Rico Lebrun; Jack Levine; Helen Lundeberg; Fletcher Martin; Octavio Medellin; Knud Merrild; Mitchell Siporin; Everett Spruce [From Foreword] Americans 1942. is the first of a series of exhibitions which the Museum of Modern Art is planning and which will provide a continuing survey of the arts in the United States during the 1940's. The first exhibition of the series, 18 Artists from 9 States, is a selection limited by definition and by necessity to a small number of painters and sculptors whose work is new to the New York public or has not been adequately represented here in recent years. Artists closely identified with the New York art world have not been included in this year's exhibition, but succeeding shows in the series will not be limited in this way. The number of artists in the exhibition has been kept small in order that each might be represented by a group of works sufficient to give an indication of style and personality. New York artists and the New York public will make the acquaintance in this show of at least two painters whose names and pictures are unknown to them. Several others, though not complete strangers, have never had a one-man exhibition in New York. Of the rest, some are newcomers who have made their mark in the last year or two, others have been showing for some years but have never been well known in the east. Most of them have studied and worked in towns far removed from the art centers of the Atlantic seaboard - some, in fact, have never been in the east. They come from Texas, California, Oregon, Washington, Missouri, Michigan, Illinois, Pennsylvania, Massachusetts - and these are only a few of the states where one may discover high talent and sound training in the arts. . . .

Seller rating:
This seller has earned a 5 of 5 Stars rating from Biblio customers.
Biblio.com member since: 2009
Manhattan Beach, California
Ask Seller a Question

Epilonian Books is a small bookseller dedicated to preserving ephemera and any esoteric or imminently extinct written work.

jacket
Sometimes used as another term for dust jacket, a protective and often decorative wrapper, usually made of paper which wraps...[more]
spine
The outer portion of a book which covers the actual binding. The spine usually faces outward when a book is placed on a shelf....[more]
tight
Used to mean that the binding of a book has not been overly loosened by frequent use.
New
A new book is a book previously not circulated to a buyer. Although a new book is typically free of any faults or defects,...[more]
edges
The collective of the top, fore and bottom edges of the text block of the book, being that part of the edges of the pages of a...[more]