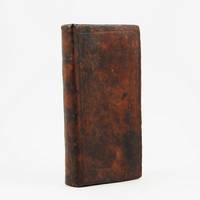 The Anatomy of Vegetables Begun. With a General Account of Vegetation Founded Thereon.

The Anatomy of Vegetables Begun. With a General Account of Vegetation Founded Thereon.

London: for Spencer Hickman, 1672. Hardcover. Very Good. 8vo - over 7¾ - 9¾" tall. Octavo. Contemporary calf rebacked to style. 3 folding engraved plates. A few contemporary annotations in ink. Sympathetically rebacked with professional repairs to corners and edges, some fraying and minor worming to fore-edge, unevenly trimmed slightly affecting some words in the dedication and on a few other pages, a little spotting and toning to contents, professional tissue repairs to the edges of the Royal Society permission leaf and title page, minor dampstaining to margins of final leaves. A very good copy. First edition of the founding text of scientific botany. Author Nehemiah Grew began his career as a physician but soon developed an interest in plant anatomy, in part because the subject had not been rigorously investigated. "Grew was a conscious pioneer in a hitherto neglected area... His work was primarily marked by his brilliant observation and description of plants and their component parts; having begun by making observations using only the naked eye, Grew supplemented these with the use of a microscope under the tutelage of his colleague Hooke. His presentations to the society began in 1672-4 with the roots, branches, and trunks of plants, proceeding thereafter to their leaves, flowers, fruit, and seeds. In each area he was innovative, studying for the first time many features of plants that have since been taken for granted, such as their cell-like structure and the growth rings in wood, and deploying techniques which have since become commonplace, such as the use of transverse, radial, and tangential longitudinal sections to analyse the structure of stems and roots. He was also an innovator in the terminology he used to describe plants, first using such terms as 'radicle' or 'parenchyma', a word adapted from its use in animal anatomy by Francis Glisson. Grew was primarily interested in the morphology and taxonomy of plants, but this led him to study plant physiology; he thus considered how buds grew, how seeds developed, and other related topics. He also recognized the sexual nature of plant reproduction, though, with characteristic modesty, he acknowledged that this idea had already occurred to the physician Sir Thomas Millington" (ODNB). The Anatomy of Vegetables was Grew's first and most significant book, and was not superseded until the 19th century. Bibliography: Norman 944; Dibner 21; Wing G-1946; Morton, pp. 178-195.

Seller rating:
This seller has earned a 5 of 5 Stars rating from Biblio customers.
Biblio.com member since: 2018
Aberlour, Moray
Ask Seller a Question

calf
Calf or calf hide is a common form of leather binding.  Calf binding is naturally a light brown but there are ways to treat...[more]
leaves
Very generally, "leaves" refers to the pages of a book, as in the common phrase, "loose-leaf pages." A leaf is a single sheet...[more]
title page
A page at the front of a book which may contain the title of the book, any subtitles, the authors, contributors, editors, the...[more]
rebacked
having had the material covering the spine replaced. ...[more]
edges
The collective of the top, fore and bottom edges of the text block of the book, being that part of the edges of the pages of a...[more]
First Edition
In book collecting, the first edition is the earliest published form of a book. A book may have more than one first edition in...[more]
octavo
Another of the terms referring to page or book size, octavo refers to a standard printer's sheet folded four times, producing...[more]