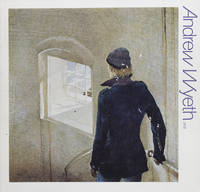 [Japan: Mitsukoshi, 1978. First edition. Illustrated. 4to. Publisher's wrappers, lightly soiled with a few scuffs. First edition. Illustrated. 4to. Inscribed to Lincoln Kirstein. INSCRIBED by the artist and his wife to Lincoln Kirstein and his wife, "For / Fido & Lincoln / with love / Andy & Betsy / This exhibition just ended / in Japan -" The inscription is in the artist's hand, with Betsy signing her own name. An outstanding association copy. Kirstein, who was on the board of MoMA, met Wyeth after the museum acquired CHRISTINA'S WORLD in 1948. Wyeth was still largely unknown at that time, and he quickly came to rely on Kirstein for support and honest criticism of his work. "Kirstein appointed himself Wyeth's friend, admirer, mentor, and stern critic - in essence a supersuccessor to NC. [...] Wyeth thinks that in the 1950s he needed Kirstein to push him toward more form in his work, more solidity" (Meryman, Andrew Wyeth: A Secret Life (1998) p. 239, 243). Kirstein, who disdained most abstract art, was essential in providing Wyeth the confidence he needed to continue work in the face of hostile critics who derided his art as sentimental and unsophisticated. Wyeth was fond of quoting Kirstein's dismissive opinion of the critics, "Why do you want approval from those horses' asses?" (ibid, p. 390). Kirstein was a father-figure to two generations of Wyeth artists, and as Andrew's son Jamie developed his own artistic gifts, Kirstein began to transfer his attention to the younger Wyeth. "After posing for nineteen-year-old Jamie, Kirstein more or less shifted his allegiance from Andrew and became Jamie's friend and mentor. Kirstein told Betsy, 'You gave me the only son I ever had'" (ibid, p. 275). "Fido" was Fidelma Cadmus (1906-1991), Kirstein's wife, herself a painter and sister of the artist Paul Cadmus.

All items, as usual, are guaranteed as described and are returnable within 30 days if not as described. Within the United States, all books are shipped UPS unless otherwise requested (please provide a street address). Overseas orders should specify shipping preference. All postage is extra. New clients are requested to send remittance with your orders. Libraries may apply for deferred billing. All New York and New Jersey residents must add the appropriate sales tax. We accept American Express, Master Card, and Visa. All items are subject to prior sale; prices are subject to change.

Founded in 1978 by James Cummins, the firm has grown to include two New Jersey locations as well as the main store at 699 Madison Avenue (between 62nd and 63rd Streets) in New York City.Hours: Monday - Friday 10:00 a.m. to 6:00 p.m. (During July & August, until 4:00 p.m. on Fridays.)The Madison Avenue store is a seventh-floor oasis for book-lovers, a quiet and pleasantly furnished book room with a carefully chosen, expertly catalogued and broad-based selection of fine and rare books, autographs, manuscripts, and works of art. We have built notable private collections for American and international clients. Our stock is always changing, and our steady input from private buying and public auctions assures our clients of new surprises (and temptations!) at each visit. Our stock covers a wide range of collecting interests, with particular emphasis in the following fields: British and American Literature, Sporting Books, Private Press and Illustrated Books, 19th-Century Color Plate Books, Americana, Travel, Sets and Fine Bindings, History, and Authors' Manuscripts and Letters. Our catalogued inventory exceeds 50,000 titles, much of which can be searched on the internet. In addition, our New Jersey warehouse contains over 400,000 books in all subject areas. We might have the books you're looking for.

wrappers
The paper covering on the outside of a paperback.  Also see the entry for pictorial wraps, color illustrated coverings for...[more]
Association copy
An association copy is a copy of a book which has been signed and inscribed by the author for a personal friend,...[more]
inscribed
When a book is described as being inscribed, it indicates that a short note written by the author or a previous owner has...[more]
soiled
Generally refers to minor discoloration or staining.
First Edition
In book collecting, the first edition is the earliest published form of a book. A book may have more than one first edition in...[more]