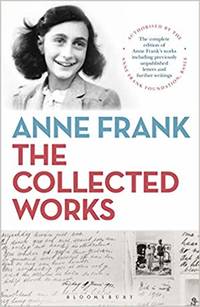 Anne Frank: The Collected Works brings together for the first time Anne's world-famous diary, in both the version edited for publication by her father and the more revealing original, together with her letters, essays and important contextual scholarship. Supported by the Anne Frank Foundation in Basel, Switzerland, set up by Otto Frank to be the guardian of Anne's work, this is a landmark publication marking the anniversary of 90 years since Anne's birth in 1929.

Anne Frank is one of the most recognized and widely read figures of the Second World War. Thousands of people visit the Anne Frank House on the Prinsengracht in Amsterdam each year to see the annex where Anne and her family hid from the Germans before eventually being deported to Auschwitz in 1944. Only Anne's father, Otto, survived the Holocaust.

An essential book for scholars and general readers alike, The Collected Works includes Anne Frank's complete writings, together with important images and documents that tell the wider story of her life. Also included are background essays by notable historians and scholars--including "Anne Frank's Life"; "The History of the Frank Family", "the Publication History of Anne Frank's diary"--and photographs of the Franks and the other occupants of the annex.

We are e-commerce based independent bookseller since 2016. We carry hundreds of new and out-of-print books at reasonable prices. Every item listed in our online stores is either shipped by Amazon Fulfillment Center or shipped directly from our warehouse. We ship internationally. You can also check our live listings on Amazon!

Seller rating:
This seller has earned a 3 of 5 Stars rating from Biblio customers.
Biblio.com member since: 2016
Brooklyn, New York
Ask Seller a Question

We have many years of experience and knowledge in selling on the web and we carry hundreds of books at reasonable prices. We offer lightning quick shipping. Most of our orders are shipped the same day they are received and have tracking numbers uploaded to Biblio with 48 hours. Every item listed in our online store is housed in a single location which makes it possible for us to pack and ship all orders within 24 hours.

A.N.
The book is pristine and free of any defects, in the same condition as ...[more]