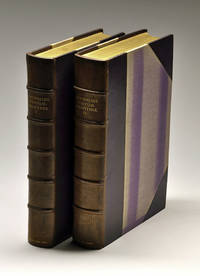 This is the indispensable catalogue of the greatest Costume book collection ever formed, in which are meticulously described, with full collations and plate counts, more than 5000 titles, and which is illustrated by no less than 603 illustrations in the text. Â

Franz Joseph and Frieda von Lipperheide were at that time the foremost publishers of fashion journals in the world (e.g. "Die Modenwelt," "Die Dame," "Illustrierte Frauen-Zeitung"). At one point their fashion magazine empire required a staff of more than 400 workers. Franz Joseph von Lipperheide (1838-1906) begin forming his costume collection in about 1870, systematically acquiring primary sources and secondary literature about fashion and traditional costume; civil, professional and religious costumes; weapons and uniforms; masks, dance and theatrical costumes, and much more. He also collected books related to weaving and knitting, tailoring, embroidery and other crafts, fashion magazines and illustrated newspapers, almanacs, etc. In 1899 Lipperheide gave his very important library to the Prussian State Library where it resided in a large and beautifully appointed room, the stately bookcases surrounded by choice paintings and miniatures. Among Lipperheide's collection of ca. 5,560 costume books, 45 MSS, and 840 fashion Almanacs are numerous treasures and great rarities. To these we must also add approximately 2,750 drawings, 23,700 individual woodcuts, etchings, and lithographs, plus ca. 2,500 photographs. Lipperheide's 686 paintings and 200 portrait miniatures are now in the GemÃ¤ldegalerie Berlin. Circa 760 items described in this first edition were lost during WWII. These entries were either abbreviated in the second edition, or were excluded altogether, and thus the present edition is still an essential work of reference. Our copy contains a signed note, dated 29 July 1895, to Martin Breslauer while the latter was in Paris. Breslauer was ruined by the Nazis and was forced to flee with his family to London, in 1937. He died of shock on 16 October 1941, the result of one of many German bombing compaigns on London. REFERENCES: Besterman 1504; Colas 1880; Hiler p. 547. NDB.

First Edition
In book collecting, the first edition is the earliest published form of a book. A book may have more than one first edition in...[more]
morocco
Morocco is a style of leather book binding that is usually made with goatskin, as it is durable and easy to dye. (see also...[more]
plate
Full page illustration or photograph. Plates are printed separately from the text of the book, and bound in at production. I.e.,...[more]
Cloth
"Cloth-bound" generally refers to a hardcover book with cloth covering the outside of the book covers. The cloth is stretched...[more]