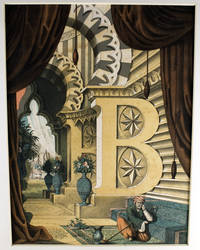 Vienna: J. de Pian and L. Müller, 1842. Pian, Jean Baptiste de. Folio. (26)ff. Twenty-six color lithographs after Jean Baptiste de Pian, printed and finished by hand by the noted Viennese lithographers Leopold Müller, Johann Höfelich, and M. R. Toma. Each plate in this series has a large letter of the alphabet fully incorporated as part of the internal decoration or architectural structure of various buildings, set in realistic landscapes. The buildings range from traditional European domestic architecture to exotic Babylonian and Egyptian temples, Moorish mosques, Indian porticoes adorned with stone elephants, and a Chinese palace. The illustrations directly reference many periods and styles of art and architecture, including the Classical, Baroque, Eclectic, Gothic, and Romantic movements. In his essay on Pian's alphabet, Dr. Anton Durstmüller notes that the letters also correspond with architectural elements in the scenes. In one illustration, the letter "F" forms the shape of a kitchen hearth, which is "Feuerstätte" in German. The illustrations are imaginative and nuanced, with attention to the finest architectural details.

Jean Baptiste de Pian, also known as Giovanni Battista de Pian, belonged to a family of Italian artists who immigrated from Venice to Vienna in the late 18th century. Jean Baptiste's father and grandfather were both draughtsmen, painters, and engravers who also worked as set designers for the Imperial Court Theater of Vienna.

This set is extremely rare; only one other copy has sold at auction in the last thirty-five years. A facsmile was published in Vienna in 1973, a copy of which accompanies this set. Housed in a blue board folding case. Marginal cropping, scattered foxing. With the bookplate of Arthur and Charlotte Vershbow inside the front cover of the box. (Durstmüller, Ein Schmuckalphabet Aus Wien).

plate
Full page illustration or photograph. Plates are printed separately from the text of the book, and bound in at production. I.e.,...[more]
bookplate
Highly sought after by some collectors, a book plate is an inscribed or decorative device that identifies the owner, or former...[more]
folio
A folio usually indicates a large book size of 15" in height or larger when used in the context of a book description....[more]