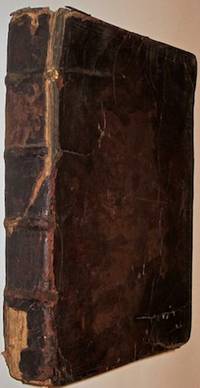 London: Printed by F. Kyngston for R. Meighn and Henry Seihl, 1628. Early Edition. Full title: Iohn Barclay, His Argenis. Translated ovt of Latine into English: the prose vpon His Maiesties command: by Sir Robert Le Grys, knight: and the verses by Thomas May, esquire. With a clauis annexed to it for the satisfaction of the reader, and helping him to vnderstand,... Printed on quality rag paper. Still bound in the original leather binding. Measures roughly 8 inches tall. Book is in good to fair condition, with substantial usage wear, though it is complete. The binding shows substantial usage wear and chips, though it is still functional. Hinges are starting, though appear quite firm in their present state. Pages are exceptionally fresh, considering the age. There are old tide marks and damp stains. Mainly a lot of generalized wear, marginal loss, abrasion, usage wear, blank end papers no longer present, 2 leaves torn without loss, many dog eared or tattered pages, overextended gathering, last few pages are wrinkled. Still, complete. 489 pages in all. No end papers. Armorial bookplate tipped in, with the crest hand drawn. This is one of the earliest English editions obtainable. The official Second Edition was in 1636, implying our copy to be a later Printing of the First Edition, though in all accuracy, this copy is likely a subsequent edition, as there were several copies in the years prior. Regardless, this is one of the earliest copies of The Argenis, printed during the early Renaissance, only a few years after it was first published. A nice reading copy, but with substantial generalized wear, as described. One of the earliest obtainable copies, printed in English. The First Edition is rare. This copy is one of the more affordable of available early copies, from the early 17th century. A medieval bestseller. The Argenis was instantly popular all over Europe. It was quickly translated from the original Latin into several languages and many times reprinted over the course of the next century. The Argenis is a romance originally centered on Argenis, an ideal princess with three suitors one good one bad and one who is finally recognized as her long lost brother. A political romance whose influence and interest is demonstrated by the many editions printed almost simultaneously in almost every European country. Barclay wrote Argenis, in part based on political events on the Continent, in Rome in 1621. It was his best and most popular work, published in a number of editions and reprinted nearly fifty times in the seventeenth century as well as being translated in to ten languages; it no doubt had its influence on the English novels to follow. (Wing B714.) Completed about a fortnight before his death, which has been said to have been hastened by poison. (Chisholm 1911.) Along with the Satyricon, the romance became one of the earliest best sellers in England and was popular over all of Europe. It has been admired by Richelieu, Leibnitz, Jonson, Grotius, Pope, Cowper, Disraeli, and Coleridge. In London, in May 1622, because of demand, the cost of a volume rose from 5s. to 14s. and King James commanded Ben Jonson to translate it, although if a translation ever existed, it seems not to have been published. Although Barclay can be claimed as French and also as Scottish, his contribution to literature is very much international. Through his associations with the court of James VI, his place in British cultural history is assured, but his Argenis, like Satyricon, were read all over Europe. This work demonstrates clearly the accessibility and importance of Latin as a language of literature and culture in the seventeenth century; they also show that the response to classical literature continued to develop throughout the Renaissance." (ODNB.)

Seller rating:
This seller has earned a 5 of 5 Stars rating from Biblio customers.
Biblio.com member since 2020
Moab, Utah
Ask Seller a Question

leaves
Very generally, "leaves" refers to the pages of a book, as in the common phrase, "loose-leaf pages." A leaf is a single sheet... [More]
bookplate
Highly sought after by some collectors, a book plate is an inscribed or decorative device that identifies the owner, or former... [More]
Fair
is a worn book that has complete text pages (including those with maps or plates) but may lack endpapers, half-title, etc.... [More]
First Edition
In book collecting, the first edition is the earliest published form of a book. A book may have more than one first edition in... [More]
tipped in
Tipped In is used to describe something which has been glued into a book. Tipped-in items can include photos, book plates,... [More]
reading copy
Indicates a book that is perfectly serviceable for reading. It may have a defect or damage. As such, reading copy is not a... [More]