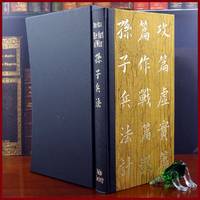 The Art of War

The Art of War


Here on offer is a very fine copy of Sun Tzu's ancient military treatise: The Art of War, published by The Folio Society, London, UK in 2007. This is a 1st edition thus printed on Caxton Wove paper at St. Edmundsbury Press, Bury St. Edmonds, UK. Quarter-bound at Hunter & Foulis, Edinburgh, UK, in cloth with crushed silk sides, and blocked with Chinese calligraphy drawn by Xiaoming Sun. The included slipcase protects the book from wear.


"The Folio Society is a privately owned London-based publisher, founded by Charles Ede in 1947 and incorporated in 1971. It produces illustrated hardback editions of classic fiction and non-fiction books, poetry and children's titles. Folio editions feature specially designed bindings and include artist-commissioned illustrations (most often in fiction titles) or researched artworks and photographs (in non-fiction titles). Most editions come with their own slipcase."

" 'The Art of War' . . . is an ancient Chinese military treatise dating from the Late Spring and Autumn Period (roughly 5th century BC). The work, which is attributed to the ancient Chinese military strategist Sun Tzu ("Master Sun", also spelled Sunzi), is composed of 13 chapters. Each one is devoted to a different set of skills (or "art") related to warfare and how it applies to military strategy and tactics. For almost 1,500 years it was the lead text in an anthology that was formalized as the Seven Military Classics by Emperor Shenzong of Song in 1080. ..."

"Preserved in China for more than 2,000 years before it was brought to the West by the French, this compact little book is widely regarded as the oldest military treatise in the world. Rumored to have been used by Napoleon in his campaigns to conquer Europe, it today retains much of its original merit. American officers read it closely during World War II. The Japanese army studied the work for decades, and many 20th-century Chinese officers are said to have known the book by heart. More recently, it has also been viewed as a valuable guide to competing successfully in business.

Stressing the importance of attacking your enemy when he is unprepared and scheming to discover his plans, the author advises avoiding the strong and striking at the weak, and using spies for every kind of business. Principles of strategy, tactics, maneuvering, and communications, the treatment of soldiers, the importance of strong troops and well-trained officers, and the administration of rewards and punishments all have a modern ring to them.

A valuable guide to the conduct of war, this classic of military strategy is indispensable to military personnel, history enthusiasts, and anyone intrigued by competition and rivalry."


This handsome text would be a worthy addendum to your collectible books library.

The Art of War is a Chinese military treatise that was written by Sun Tzu in the 6th century BC, during the Spring and Autumn period. Composed of 13 chapters, each of which is devoted to one aspect of warfare, it is said to be the definitive work on military strategies and tactics of its time, and still one of the basic texts. The Art of War is one of the oldest and most successful books on military strategy. It has had an influence on Eastern military thinking, business tactics, and beyond.

Seller rating:
This seller has earned a 5 of 5 Stars rating from Biblio customers.
Biblio.com member since 2020
College Station, Texas
Ask Seller a Question

folio
A folio usually indicates a large book size of 15" in height or larger when used in the context of a book description. Further,... [More]
fine
A book in fine condition exhibits no flaws. A fine condition book closely approaches As New condition, but may lack the... [More]
Cloth
"Cloth-bound" generally refers to a hardcover book with cloth covering the outside of the book covers. The cloth is stretched... [More]