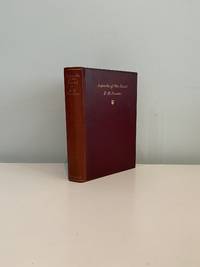 Aspects Of The Novel

Aspects Of The Novel

The Clark Lectures, sponsored by Trinity College of the University of Cambridge, have had a long and distinguished history and have featured remarks by some of England's most important literary minds. Leslie Stephen, T.S. Eliot, F.R. Leavis, William Empson and I.A. Richards have all given celebrated and widely influential talks as the keynote speaker. One of the Lectures' most important milestones came in 1927 when, for the first time, a novelist was invited to speak. E.M. Forster had recently published his masterpiece, A Passage to India, and rose to the occasion, delivering eight spirited and penetrating lectures on the novel. The decision to accept the lectureship was actually a difficult one for Forster, as he had deeply ambivalent feelings about the use of criticism. Although suspecting that criticism was somewhat antithetical to creation, and upset by the thought that time spent preparing for the lectures was time away from his own work, Forster accepted. His talks were witty and informal, and they consisted of sharp, penetrating bursts of insight rather than overly-methodical analysis. They were a great success. Published later as Aspects of the Novel, the ideas articulated in his lectures would gain widespread recognition and currency in twentieth century criticism.Of all the insights contained in Aspects of the Novel, none has been more influential or widely discussed than Forster's discussion of "flat" and "round" characters. So familiar by now as to seem commonplace, Forster's distinction is meant to categorize the different qualities of characters in literature and examine the purposes to which they are put. A "flat" character, according to Forster, can be summed up n a single sentence and acts as a function of only a few fixed character traits. "Round" characters are capable of surprise, contradiction, and change; they are representations of human beings in all of their complexity. Forster's aim, however, is not to elevate the round at the expense of the flat, although he admits that the round is on the whole always a more interesting creation. Instead, he argues that there are compelling artistic reasons for a novelist to employ flat characters. And there are unquestionably great novelists, such as Dickens, who use only flat characters.Yet it would be a mistake to reduce this book to its most famous line of argument. Aspects of the Novel also discusses the difference between story and plot, the characteristics of prophetic fiction, and narrative chronology. Throughout, Forster draws on his extensive readings in English, French and Russian literature, and discusses his ideas in reference to such figures as Joyce, Tolstoy, Dostoevsky, James, Sterne, Defoe and Proust.A landmark in literary criticism, Aspects of the Novel has also provoked its fair share of disagreement. There are many critics who take issue with Forster's method as well has his conclusions, but the extent to which this work has come under attack is in many ways just another measure of its vitality.

Seller rating:
This seller has earned a 3 of 5 Stars rating from Biblio customers.
Biblio.com member since: 2017
Stockport, Cheshire
Ask Seller a Question

With more than thirty years' experience of collecting literary first editions, I specialise in the areas of both contemporary and earlier fiction, poetry, drama and children's books with particular emphases on signed modern firsts, authors' first and early published books, American and Irish literature and literary prize-winning writers.

shelf wear
Shelf wear (shelfwear) describes damage caused over time to a book by placing and removing a book from a shelf. This damage is...[more]
VG
Very Good condition can describe a used book that does show some small signs of wear - but no tears - on either binding or...[more]
gilt
The decorative application of gold or gold coloring to a portion of a book on the spine, edges of the text block, or an inlay in...[more]
spine
The outer portion of a book which covers the actual binding. The spine usually faces outward when a book is placed on a shelf....[more]
Cloth
"Cloth-bound" generally refers to a hardcover book with cloth covering the outside of the book covers. The cloth is stretched...[more]
First Edition
In book collecting, the first edition is the earliest published form of a book. A book may have more than one first edition in...[more]
jacket
Sometimes used as another term for dust jacket, a protective and often decorative wrapper, usually made of paper which wraps...[more]
sunned
Damage done to a book cover or dust jacket caused by exposure to direct sunlight.  Very strong fluorescent light can cause...[more]