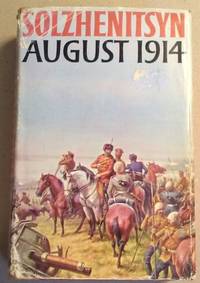 August 1914 is a novel by Aleksandr Solzhenitsyn (1918-2008) about the defeat of the Imperial Russian Army at the Battle of Tannenberg in East Prussia. The novel is an unusual blend of fiction narrative and historiography, and has given rise to extensive and often bitter controversy, both from the literary as well as from the historical point of view.

The book was translated and published in 1972, by Bodley Head. Its sales were such that two more printings were quickly completed, all in 1972. This is a copy from the 3rd printing.

In 1974, Solzhenitsyn was expelled from the Soviet Union and, two years after that, he moved to the USA, where he began to revise this story. In 1984, a new version, much expanded, was published, making the first book a limited edition.

The dust jacket is in very good shape, with normal wear. (That white mark you see below '1914' is half of the price tag. I scraped the other half off with my fingernail.) Someone has taped the top and bottom of the spine, quite skillfully.

The rest of the book is perfect, with no marks of any kind in or on it. The covers are a bright cherry red, with very bright gold lettering on the spine. Also, as you can see, there's a fold-out map at the back relating to the battle.

NOTE: My quoted price for shipping OUTSIDE of North America is for surface mail without tracking. For other shipping options, please contact me.

August 1914 is a novel by Russian novelist Aleksandr Solzhenitsyn about Imperial Russia's defeat at the Battle of Tannenberg in East Prussia. The novel was completed in 1970, first published in 1971, and an English translation was first published in 1972. The novel is an unusual blend of fiction narrative and historiography, and has given rise to extensive and often bitter controversy, both from the literary as well as from the historical point of view.

New
A new book is a book previously not circulated to a buyer. Although a new book is typically free of any faults or defects, "new"... [More]
jacket
Sometimes used as another term for dust jacket, a protective and often decorative wrapper, usually made of paper which wraps... [More]
spine
The outer portion of a book which covers the actual binding. The spine usually faces outward when a book is placed on a shelf.... [More]