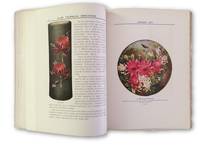 The Australian Flora in Applied Art. Part I: The Waratah

The Australian Flora in Applied Art. Part I: The Waratah

Sydney: Government Printer for the Technological Museum, 1915. First Edition. Important Australian design book giving historical examples of the utilization of the waratah in architectural decoration (brackets, capitals, columns, ceilings, et cetera), bookbinding, ceramics, lace, ironwork, wall paper, dado design, contemporary art nouveau applications and early colonial art. The author describes the use of waratah timbers in cabinetmaking, inlays and fine carpentry generally. ?To the majority of Australians, the word ?Waratah? has, perhaps, a rather limited geographical significance, for most people regard its application as referring to a plant only found somewhere near Port Jackson, and producing wonderfully gorgeous flowers. By the help of a work on this particular plant ? (?The Glory of the Australian Bush?), it is hoped to make more generally known , that such restriction of geographical area is not correct, for both Victoria and Tasmania can claim a Waratah, as well as New South Wales; and so it is seen that these marvelous flowers extend over a fairly large area of this Continent.? Introduction, p.11. The work covers the history of the use of the waratah in the decorative arts, at a time when the surge to Federation and nationhood led to a greater appreciation of and call for the utilization of native flora and fauna as well as indigenous materials ? wood in particular ? instead of those imposed and imported from the Old World. Perhaps one reason for the waratah?s popularity is the ease with which it can be stylised into an infinite variety of ornamental treatment, much as the Egyptians with the Lotus flower and the Greeks with the Acanthus leaf. Presentation copy signed by the author. Quarto, bound in the original gilt decorated red cloth, generously illustrated throughout, including numerous colour plates, an attractive copy, very good to near fine.

First Edition
In book collecting, the first edition is the earliest published form of a book. A book may have more than one first edition in...[more]
gilt
The decorative application of gold or gold coloring to a portion of a book on the spine, edges of the text block, or an inlay in...[more]
fine
A book in fine condition exhibits no flaws. A fine condition book closely approaches As New condition, but may lack the...[more]
New
A new book is a book previously not circulated to a buyer. Although a new book is typically free of any faults or defects,...[more]
Cloth
"Cloth-bound" generally refers to a hardcover book with cloth covering the outside of the book covers. The cloth is stretched...[more]
quarto
The term quarto is used to describe a page or book size. A printed sheet is made with four pages of text on each side, and the...[more]