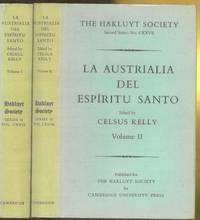 2 volumes. xvii+270 pages with fold out frontispiece map 7 additional maps of which one is fold out, 4 illustrations and tables (some folding), The 'Relación' of Munilla, chaplain and vicar of the royal fleet and commissary of the Franciscans in the Quirós expedition, with an extensive introduction which is continued in the second volume with which the main pagination is continuous; xv+273-446 pages with 1 map, 3 illustrations, appendices and index. The Sumario Breve of Juan de Iturbe, followed by documents bearing on the preparations for the expedition, the voyage of Quirós, Quirós in New Spain, negotiations for another expedition, and the missionary plan. Octavo ((9" x 6") issued in blue with gilt lettering to spine and pictorial representation of the ship Victoria on the cover. Translated and Edited by Celsus Kelly . Works issued by the Hakluyt Society, Second Series, Numbers 126 and 127. First editions. Pedro Fernandes de Queirós (Spanish: Pedro Fernández de Quirós), (1565–1614) was a Portuguese navigator best known for his involvement with Spanish voyages of discovery in the Pacific Ocean, in particular the 1595-1596 voyage of Alvaro de Mendaña de Neira, and for leading a 1605-1606 expedition which crossed the Pacific in search of Terra Australis. In 1598 Queirós returned to Spain and petitioned King Philip III to support another voyage into the Pacific. A devout Catholic, Queirós also visited Rome in 1600, where he obtained the support of the Pope, Clement VIII, for further explorations. He greatly impressed the Spanish Ambassador in Rome, the Duke of Sesa, who described him as a “man of good judgement, experienced in his profession, hard working, quiet and disinterested.” While in Rome Queirós also first wrote his Treatise on Navigation as a letter to the king, further reinforcing his reputation as a navigator. In March 1603 Queirós was finally authorized to return to Peru to establish another expedition, with the intention of finding Terra Australis, the mythical "great south land," and claiming it for Spain and the Church. Queirós's party of 160 men on three ships, San Pedro y San Pablo (150 tons), San Pedro (120 tons) and the tender (or launch) Los Tres Reyes left Callao on 21 December 1605. In January 1606 the expedition discovered Henderson Island and Ducie Island. In May 1606 the expedition reached the islands later called the New Hebrides and now the independent nation of Vanuatu. Queirós landed on a large island which he took to be part of the southern continent, and named it Australia del Espiritu Santo. In some his later memorials, notably the Eighth, this was altered to Austrialia del Espiritu Santo (The Austrian Land of the Holy Spirit) to flatter King Philip III, who was of the House of Austria. The island is still called Espiritu Santo. Here he stated his intention to establish a colony, to be called Nova Jerusalem. Queirós's religious fervour found expression with the founding of a new Order of Chivalry, the Knights of the Holy Ghost. The Order’s purpose was to protect the new colony. However, within weeks the idea of a colony was abandoned due to the hostility of the Ni-Vanuatu and to disagreements among the crew. After six weeks Queirós's ships put to sea to explore the coastline. On the night of June 11, 1606 Queirós in the San Pedro y San Pablo became separated from the other ships in bad weather and was unable (or so he later said) to return to safe anchorage at Espiritu Santo. He then sailed to Acapulco in Mexico, where he arrived in November 1606. In the account of Diego de Prado y Tovar, which is highly critical of Queirós, mutiny and poor leadership is given as the reason for Queirós's disappearance. Two weeks later, his second-in-command, Luis Váez de Torres, after searching in vain for Queirós and assuming his ship was wrecked, left Espiritu Santo. Torres successfully reached Manila, the center of the Spanish East Indies in May 1607, charting the southern coastline of New Guinea on the way and in doing so sailing through the strait that now bears his name. Condition: Jacket corners chipped, edges with some small tears, spine extremities lightly rubbed and age darkened else very good in like jackets.

edges
The collective of the top, fore and bottom edges of the text block of the book, being that part of the edges of the pages of a...[more]
New
A new book is a book previously not circulated to a buyer. Although a new book is typically free of any faults or defects,...[more]
Poor
A book with significant wear and faults. A poor condition book is still a reading copy with the full text still readable. Any...[more]
spine
The outer portion of a book which covers the actual binding. The spine usually faces outward when a book is placed on a shelf....[more]
octavo
Another of the terms referring to page or book size, octavo refers to a standard printer's sheet folded four times, producing...[more]
gilt
The decorative application of gold or gold coloring to a portion of a book on the spine, edges of the text block, or an inlay in...[more]