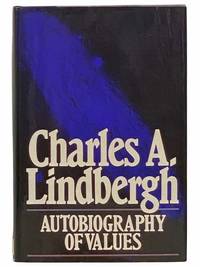 by Lindbergh, Charles A

New York: Harcourt Brace Jovanovich, 1978. Hard Cover. Good/Good. Former library copy - usual marks. 1978 Hard Cover. We have more books available by this author!. xxi, 423 pp. Dust jacket notes: "This is Charles A. Lindbergh's story of his own life. It is the story of the events he caused, and their effects on him. It is the story of the values he learned as a boy in Minnesota and how they were enhanced, or changed, or supplanted as he lived through a century dominated by science and war and technology and nationalism. He was probably the greatest aviator of all time. He was certainly the most celebrated young man in American history. He was also a scientist, soldier, conservationist, and adviser to industry and government on flight. He was a superb writer, as this book so dramatically confirms. Autobiography of Values is a rare work, the spare and beautiful telling of an American life that belongs with the great memoirs in our literature: Franklin, Adams, Steffens. The depth of Lindbergh's feeling for life, at times poetical and mystical, is shown by him in settings around the earth: Africa, the Pacific islands, Europe, Mexico, England, France, Germany, Russia, India. At the end, he was still a questing man, an adventurer in space and time and spirit." With 81 Photographs.

From his days as a barnstorming pilot to his transatlantic flight to his role in mapping international mail routes, Lindbergh never stopped challenging himself. This is an unprecedented view of an extraordinary man. New Introduction by Reeve Lindbergh; Index; photographs and maps.

Unless alternate arrangements have been made, payment is expected at the time of purchase. We accept payment by credit card, PayPal, check, or money order. All orders are shipped promptly and securely packed in boxes to avoid damage during shipment.

All items are guaranteed to be as described (this includes condition, edition, authenticity of signatures, etc.). If you are not satisfied with your order, please contact us and we will be happy to work with you.

Seller rating:
This seller has earned a 5 of 5 Stars rating from Biblio customers.
Biblio.com member since 2005
Webster, New York
Ask Seller a Question

Yesterday's Muse Inc. is an independent used & rare bookseller that has been in operation for over 15 years. We opened our first 'brick and mortar' storefront in December of 2008 in our hometown of Webster, NY.Owner Jonathan Smalter is a member of the Antiquarian Booksellers' Association of America (ABAA), former vice president of the Independent Online Booksellers Association (IOBA), both of which are trade organizations created to promote ethical online selling practices, and to encourage continuing education among fellow booksellers. He is also a 2011 graduate of the Colorado Antiquarian Book Seminar (CABS). He has nearly 20 years of experience in the book trade, during which time he has become adept at evaluating used and collectible books.

jacket
Sometimes used as another term for dust jacket, a protective and often decorative wrapper, usually made of paper which wraps... [More]