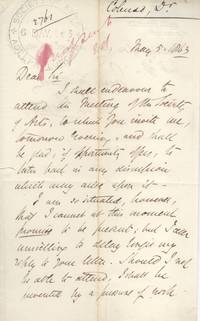 saying that he will "endeavour to attend the meeting of the Society of Arts to which you invite me tomorrow evening and shall be glad if opportunity offers, to tke part in any discussion which may arise upon it. I am so situated, however, that I cannot at this moment promise to be present but I am unwilling to delay longer my reply to your letter, Should I not be able to attend I shall be prevented by a pressure of work falling upon me which I cannot put off ...", 1½ sides 8vo., 23 Sussex Place, Kensington, W., 5th May Colenso's 'trial', in November 1863 during his absence in England, by Archbishop Gray of Capetown, was a cause célèbre. Colenso, a devoted pastor of the Zulus, was also a mathematician and biblical scholar of the modern German school. He had published a Commentary on Romans, and in 1862 set out for England to oversee the publication of the Pentateuch in 5 volumes. Gray sought to depose him in his absence, and when Colenso appealed to the Privy Council, controversy raged not unlike the great debate over evolution of 1859-1860. Colenso's defence fund bore subscriptions from scientists such as Babbage and Darwin, broad churchmen or younger dons such as Farrer and Jowett, well wishers and friends such as Joseph Chamberlain and Rajah Brooke, and not a few of the clergy. He became by invitation a member of the Athenaeum. In April 1865 the Privy Council found in Colenso's favour, and on 15th August he set off back to Africa. The Royal Society for the Encouragement of Arts, Manufactures and Commerce (RSA) is a London-based organisation committed to finding practical solutions to social challenges. Charles Dickens, Adam Smith, Benjamin Franklin, Karl Marx, William Hogarth, John Diefenbaker, Stephen Hawking, Benson Taylor and Tim Berners-Lee are some of the notable past and present Fellows, and today it has Fellows elected from 80 countries worldwide.

All purchases will be sent by First Class Mail. All material is mailed abroad by AIR. Insurance and Registration will be charged extra. Payment should be made on receipt of invoice. VAT IS CHARGED AT THE STANDARD RATE ON AUTOGRAPH LETTERS sold in the EEC, except in the case of manuscripts bound in the form of books. Our VAT REG No. is 341 0770 87. The 1993 VAT REGULATIONS AFFECT CUSTOMERS WITHIN THE EEC. PAYMENTS MAY BE MADE BY VISA/BARCLAYCARD, ACCESS/MASTERCARD OR AMEX from all countries. Please quote your card number, security code & expiry date and name and address when ordering by telephone if you wish to make use of this service. PLEASE CONFIRM ANSWERPHONE ORDERS BY MAIL OR PHONE All material is guaranteed genuine and in good condition unless otherwise stated. Any item may be returned within fourteen working days of receipt.

Seller rating:
This seller has earned a 5 of 5 Stars rating from Biblio customers.
Biblio.com member since: 2006
Calne
Ask Seller a Question

I specialise in Autograph letters, Manuscripts and signed photos in all fields. I am a member of the ABA, ILAB & PADA