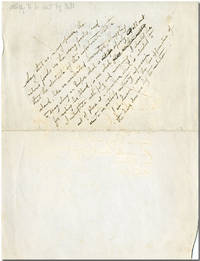 [London?], 1932. 11 lines, in ink, on verso of received autograph letter, signed (see below). Heavy horizontal fold (not affecting Shaw's text), a bit of edge used and ink toning to pale blue paper, but good to very good. In response to a letter from J.Aubrey Reis, written on behalf of the All British & Empire Nation's Foods Exhibition, inviting Shaw to attend and "possibly say a few words about your recent tour in Africa," Shaw directs his secretary: "Say that as, in my opinion, the nation's foods are the wrong foods, and the spectacle of this unfortunate little island, like an overloaded locomotive, struggling to drag along an Empire, which is [deletion] openly [deletion] all out for sucking her blood, is one which [deletions] I contemplate with pity and misgiving, I should be out of place at a luncheon which is intended to create a contrary impression. I am, however, none the less appreciative of the honor done me by the invitation." The verso is also captioned in pencil by Shaw: "Reply to be sent by B.P.," i.e. Blanche Patch, and there is a thin, faint stoke through the note, as an indication of its completion.

Seller rating:
This seller has earned a 5 of 5 Stars rating from Biblio customers.
Biblio.com member since 2006
New Haven, Connecticut
Ask Seller a Question

verso
The page bound on the left side of a book, opposite to the recto page.