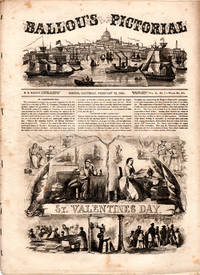 Boston: Ballou, M.M., 1856. First Edition . Soft cover. Very Good. Elephant Folio - over 15" - 23" tall. From Engravings. Boston: M.M. Ballou, 1856. First Edition. The February 16, 1856 issue, Volume X, No. 7, Whole No. 241. Numerous illustrations from engravings. Elephant folio size, sewn newsprint wraps, 16 pp. Better than Very Good, with very little of the common peripheral darkening, modest edge wear, a few spots of foxing. Not all that far short of Near Fine. See scans. A sturdy and handsome example. Maturin Ballou's paper was quite supple, not at all fragile, and it shows. Sharp, healthy, well-preserved. This issue contains stories, articles, and / or the diverse and now somewhat legendary engravings - here, regarding: cover article, St. Valentine's Day, with large half-page engraving; several more chapters of serial fiction by the editors, The Contrabandist - The Secret of A Life. A True Story of Southern France / with two engravings illustrating that; Paris by Night; Walking Leaves of Australia; Cathedral of St. Giovanni (Turin), with one large engraving; City of Genoa, with one large engraving; Palace of the Senate (Turin), with one large engraving; Mr. Baker's Domestic System, by Mary E. Robinson; a massive two-full-page engraving of the Deck of the U.S. Frigate Constitution at the Commencement of Action With the British Frigate Guerriere on August 19, 1812; The Black Saddle-Mare, by Horace B. Staniford; John G. Gilbert, biographical brief with portrait engraving; Wellington Hill Depot (winter engraving); Remarkable Trees, a short piece on several unusual tree species from around the world; A Lesson for Borrowers, by Mary L. Meany; and, on the back cover, a full-page engraving of Charles Mackay's poem, The Miller of the Dee, with the verse itself below it; as well as of course a number of short editorials, news pieces, poems, and ads. Please see all scans. Maturin Ballou's 16-page newsprint periodical was already a piece of American history when he, as managing editor of Gleason's Pictorial, bought that - the first successful illustrated weekly newspaper in America - from owner Frederick Gleason in 1855. lLng2

G
Good describes the average used and worn book that has all pages or leaves present. Any defects must be noted. (as defined...[more]
First Edition
In book collecting, the first edition is the earliest published form of a book. A book may have more than one first edition in...[more]
leaves
Very generally, "leaves" refers to the pages of a book, as in the common phrase, "loose-leaf pages." A leaf is a single sheet...[more]
fine
A book in fine condition exhibits no flaws. A fine condition book closely approaches As New condition, but may lack the...[more]
folio
A folio usually indicates a large book size of 15" in height or larger when used in the context of a book description....[more]